The launch date of the Samsung Galaxy F62 in India is getting closer and closer. This smartphone has been in production since early December. Recently, the Samsung India website has also launched a support page for the machine. 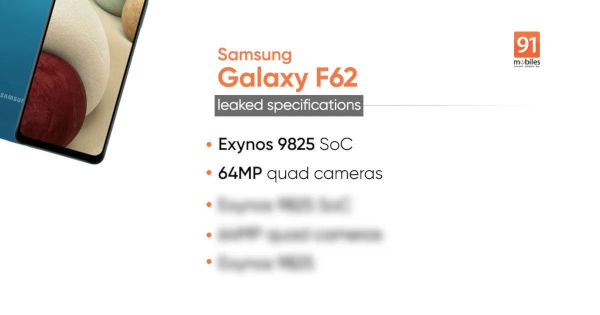 MySmartPrice got news from the whistleblower Ishan Agarwal that Samsung Galaxy F62 will use a 7000mAh large battery, also sporting a 6.7-inch sAMOLED display and a 64-megapixel main camera.

The specifications of the Galaxy F62 revealed by Agarwal are basically the same as those of the rumored Samsung Galaxy M62. Both smartphones may feature 7000mAh large-capacity batteries and large-size displays. According to the reports, the Galaxy F62 model SM-E625f will use a 6.7-inch sAMOLED display. There is no information on supporting for fast charging. But seems like the device will provide at least a 25W fast charging solution.

In addition, the Galaxy F62 will be available in two colors of green and blue. At the same time, this phone will include 6GB of memory and 128GB of storage. The previous GeekBench list showed that this smartphone will come sporting the Exynos 9825 chipset. As for the camera, Galaxy F62 will also feature a 64-megapixel four-camera system. But the details of the other three sensors are still not certain. In addition, this phone may be equipped with a 32-megapixel front camera and One UI 3.1 based on Android 11.

The price of the Samsung Galaxy F62 in India was reported to be 25,000 rupees (about $343) or less. Now, a new report reveals the key specifications of the Galaxy F62, including battery and display details.