The last time the Galaxy E series got a new a addition was in 2015. In fact, the series only has a single member and that this the Samsung Galaxy E7. And since then, it somehow vanished as the company decide to focus on the other Galaxy mid-range series and flagship devices. But, it seems Samsung want to bring the series back again as the support page for a possible Galaxy E02 has gone live.

The support page for a new Samsung mobile with model number SM-E025F/DS has gone live on the Indian website. That was deduced from device’s names from the model numbers. For instance, the recently launched budget Galaxy M02s has SM-M025F as its model numbers. In that case, this device could very well debut as the Samsung Galaxy E02.

Apart from the support page, this model number has also been spotted on Wi-Fi Alliance and India’s BIS certifications a while ago. Here, the Wi-Fi certification reveals that the device supports Wi-Fi 2.4GHz and runs Android 10 OS. 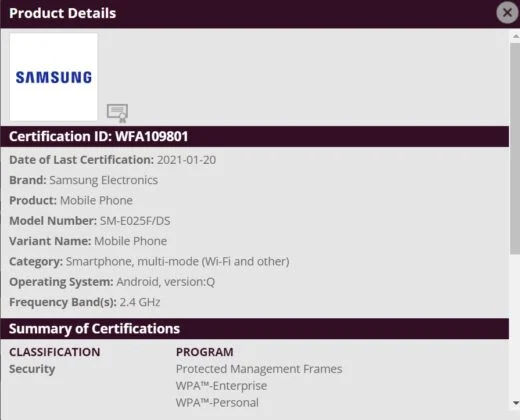 Aside these, at present, no concrete info regarding the specs and features of the devices is available yet. It is possible that Samsung might launch this device under a budget category and rumors say that it may launch under INR10,000 in India.

Well, this is just a premature speculation about the above listings and it could change any day in the future. Let’s wait for the official word to get an idea about what’s coming.

Oppo May Launch Tablets and Notebooks In 2021