Chinese tech giant Huawei is a company with many subsidiaries but the gaming section is yet to be explored the company. That may change soon, if the latest rumor that emerged on Weibo is true. A tipster @Tomato Prince has claimed that Huawei is planning to release its own game console similar to the Sony PlayStation and Microsoft‘s XBox gaming consoles. 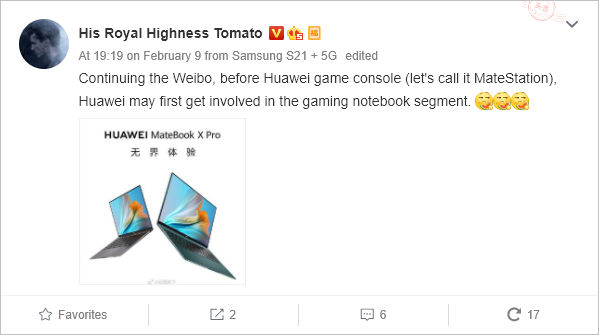 The tipster also went ahead to disclose that Huawei will launch a gaming laptop within this year, marking its official entry into the gaming products field.

Last year, before the sales of the Honor brand, the Honor Hunter V700 Gaming laptop was launched which technically is a product under Huawei’s belt. However, since the Honor brand has been sold off, the same cannot be said about the gaming laptop. Huawei was also expected to launch a branded gaming notebook but that didn’t happen.

Talking of the gaming console, this is the first time we are getting wind of a Huawei-branded gaming console. What makes it even interesting is the comparison with the Xbox and PlayStation. That means we are looking at a high-end console. It is possible the console will be developed in partnership with gaming software developers like Tencent games so as to get popular games inside the console.

These are just mere speculations, though. We can’t vouch for the credibility of these disclosures but considering the sales of Honor, Huawei will definitely launch its own gaming notebook. The configuration and release details are still unknown. We can’t say the same thing for the gaming console, so take the information with a pinch of salt.

ALSO READ:  HTC Foldable Smartphone Might Be In The Works