Late last week, a tipster claimed that Samsung will be launching a Galaxy M series smartphone with a big screen in India this week. Yesterday, the name, specs and price of the device were revealed by a report. And today, the South Korean company has officially confirmed the announcement of this device on January 7 in the country. 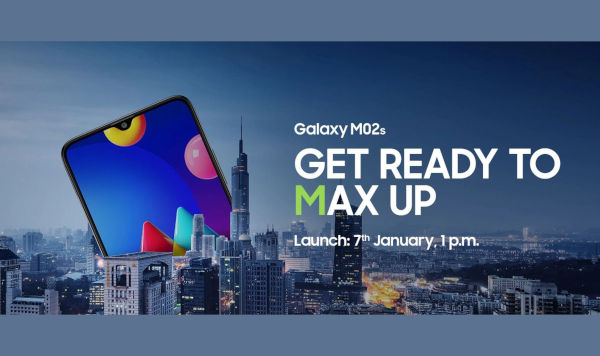 When Mukul Sharma shared a teaser poster with the text #MAXUP, we thought this phone could be either the Galaxy M62 phablet or the most leaked Galaxy M12. But this smartphone turns out to be Galaxy M02s, a rebadged Galaxy A02s with more RAM and storage, as per its Google Play Console listing, an IANS report as well as official teasers by the company.

This smartphone has been confirmed to flaunt a 6.5-inch IPS LCD panel with a V-shaped notch at the top center (aka Infinity-V Display). It will be powered by Qualcomm Snapdragon 450 SoC paired with 3GB/4GB RAM and 32GB/64GB internal storage.

On the back, the device will sport a vertically aligned triple camera setup consisting of a 13MP primary sensor, 2MP macro shooter, and a 2MP depth sensor accompanied by an LED flash. Whereas, for selfies and video calls, the phone will use a 5MP sensor.

Last but not least, the handset will be backed by a 5,000mAh battery. Also, since it is expected to be the same as Galaxy A02s, it should also feature USB Type-C, 3.5mm headphone jack, and a dedicated microSD card slot. But unfortunately, it won’t come with a fingerprint sensor.

Anyway, the main highlight of the Galaxy M02s will be its price. That’s because it is reported to be the first Samsung smartphone with 4GB RAM under INR 10,000 in India.

Samsung Galaxy M21 Details Leak alongside Colours For The M11 And...