Just after Xiaomi announced Mi Air Charge, Motorola has introduced its understanding of how devices should charge wirelessly from a distance. The technology of the Lenovo-owned company can charge from a one meter distance, provided nothing stands in the way between the charger and the device. 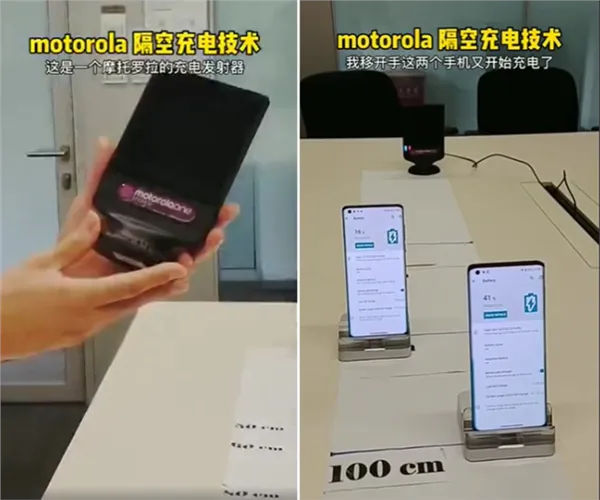 According to the official video, two Motorola Edge phones (likely modified for the test) are placed in a standing position 80cm and 100cm away from the charger, respectively. They immediately start to fill up the battery, but once a person places his hand on the charger, the process stops.

The charger is reportedly called Motorola One Hyper and while the technology is based on the Qi standard, the company said it is actually better. There could be seven phones, charged simultaneously, but Motorola does not give any actual numbers such as the charging rate of the device and whether all phones can have the same speed or they share the charging capacity.

Motorola also claimed this is â€œthe right way to do wireless chargingâ€ and while it might sound like a dig to Xiaomi, it is more likely the company wants the industry to move forward from the need to have the phone constantly sitting on a charger.

Xiaomiâ€™s air charging technology doesnâ€™t suffer from foreign objects. According to the company, there is no need to put the phone in a fixed position, and it can be wirelessly charged at a long distance when playing in the hand or in the pocket. In the case of Motorola video, the charging of the transmitter is stopped immediately when the transmitter is blocked by hand.

Infinix Unveils Hot 7 In Nigeria – The smartphone made for...

The next Microsoft Surface Pro 7 will have an improved design...