A couple of months back, Chinese tech giantÂ ZTE launched the worldâ€™s first smartphone with an Under Display camera called the Axon 20 5G. The smartphone has now received a teardown treatment the popular YouTuber Zach with channel JerryRigEverything. 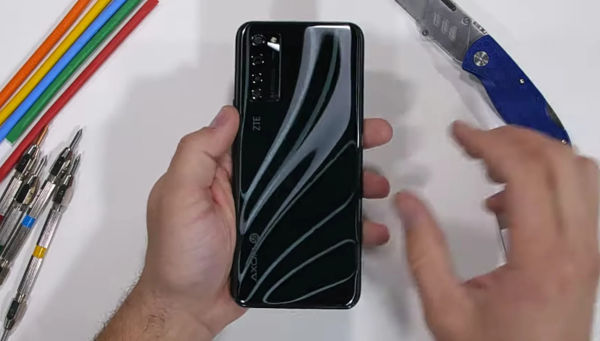 The major focus is the Under Display camera of the Axon 20 5G and that is reflected in the special attention given to it. After analyzing the camera, the YouTuber then proceeded to the usually Scratch, Bend and Burn tests to determine if the device is worth the salt.

For the scratch test, like most other devices with a glass display, it scratches at a level 6 on the Mohs scale of hardness. Zachâ€™s blade was able to chip some chunks clean off the frame because it is made from plastic. Also, the rear panel and camera cutouts are both made from regular glass with the back panel having a cool glossy finish.

The scratch test was also carried out on the under-display optical fingerprint sensor and even after scratches from a level 7 mineral pick it was still able to unlock the phone with ease. However, a quick burn near the selfie cam area of the display messes with its hiding properties and leaves a more visible trail.

During the bend test, the device experienced a slight bend. That isnâ€™t a surprise as the device utilized a plastic frame but despite bending slightly, the device still remains intact.

The phone has four rear cameras â€“ a 64MP primary camera, an 8MP ultrawide angle camera, a 2MP depth sensor, and a 2MP macro camera. The camera under the display is a 32MP sensor. The phone also has an in-display fingerprint scanner, an â€œunder-screen speakerâ€, and runs Android 10 out of the box.

The Axon 20 5G was recently released for a price tag of $449 for the global market.

The GPD Win 3 Is A Handheld Gaming PC With Integrated Controller, Coming Soon