The Samsung Galaxy S21 series is expected to be unveiled in mid-January 2021. The successor to the Galaxy S20 series will include three models consisting of Galaxy S21, Galaxy S21+, and Galaxy S21 Ultra. The design of all three smartphones has leaked in new high-quality renders, showcasing them in all colors. 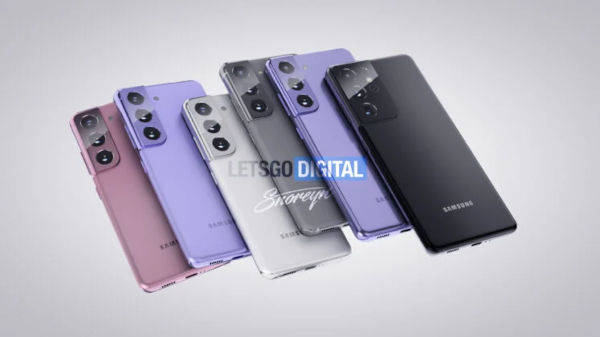 LetsGoDigital is well-known for patent and trademark-related stories. The publication also releases concept renders as well as renders based on leaks. But the new Galaxy S21 renders are based on information acquired from sources close to Samsung. Hence, the publication says that these renders are identical to the final products that will be released next month.

Since we have covered all the leaks of the Galaxy S21 series so far, we won’t be going through their entire specs in this article. Instead, we will talk about the new information revealed by this leak along with a few primary specs.

First and foremost, these renders are designed by an Italian designer called Giuseppe Spinelli (Snoreyn) based on details provided by LetsGoDigitial’s industry sources. With that being said, let us talk about some details.

According to these renders, the SIM card slot on the Galaxy S21 series will be located at the bottom, instead of the top. Further, they will come with a distinct camera array design. The regular Galaxy S21 and Galaxy S21+ will feature an identical triple camera setup, whereas the Galaxy S21 Ultra will sport a more advanced quad-camera setup.

Also, interestingly, only the ‘Ultra’ model will flaunt a metal and glass sandwich build since the ‘Plus’ and ‘Standard’ model will come with a plastic and metal build just like the Galaxy Note20.

Although all three of them will be powered by the same Snapdragon 888/Exynos 2100 chipsets and run the identical Android 11-based One UI 3.1 operating system, the UWB chip will be limited to the Galaxy S21+ and Galaxy S21 Ultra. Additionally, the Ultra will be the only phone in this series to feature WiFi 6E.

Huawei P40 Pro Real Image Spotted In A Subway, Has A...