Apple has announced a new-generation M1 chip for its latest Mac computers built on a 5nm process. The chipset is the company’s first ARM-based chip and provides improved performance and better battery life to its personal computers. 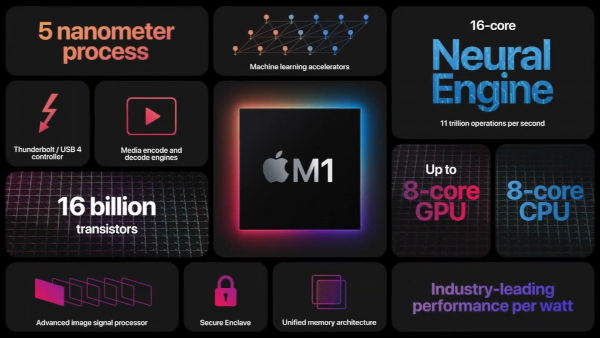 The new chip was unveiled alongside theÂ MacBook Air and MacBook Pronotebooks and theÂ Mac mini desktop computer, all of which are powered by the powerful chipset. Appleâ€™s senior vice president of hardware technologies, Johny Srouji disclosed during the event that the companyâ€™s goal in creating the chip was to achieve â€œindustry-leading performance and features while relentlessly focusing on performance efficiency.â€

The company seems to have achieved that goal as the new M1 chip onboard the Macbook Air aids the provision of a good battery life which is said to be capable of withstanding up to 15 hours of web browsing and 18 hours of video. In terms of speed, the new processor is also touted to be three and a half times faster than the previous Intel-based model. The graphics speed also comes in five times faster, according to Apple.

In terms of specs, the new M1 chip has a staggering 16 billion transistors, which is significantly higher than the 11.8 billion used in the iPhone 12â€™s A14 Bionic. The CPU core is also increased from six to an eight-core arrangement in order to boost the performance.

Additionally, the M1 has four high-performance cores for heavy-duty work, compared to two on the iPhone 12, and four high-efficiency cores for low-priority tasks.

Just like the chipsets on the iPhones and iPads, the Macâ€™s M1 chip features dedicated circuitry for graphics and artificial intelligence processing. These modules are linked with a unified memory architecture, eliminating the need for the PC to spend time copying data internally as it switches processing approaches.

The memory chips, while separate from the brains of the operation, are housed within the same chip package alongside processor for better speed.