WhatsApp has been receiving few updates for sometimes now and more updates are still coming in. Two new features will soon be rolled out to Android users which we are going to discuss below.

WhatsApp users may soon be able to join ongoing group calls that they have missed through a new prompt. If a contact invites an unavailable user to a call, that user can then join or ignore said ongoing call the next time they open WhatsApp. Itâ€™s a feature thatâ€™s seemingly meant to streamline group calls. 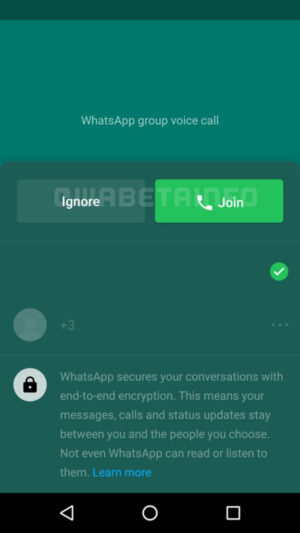 Functionally, it would also bring WhatsApp closer to the likes of Zoom and Skype that allow users to join ongoing calls at will.

Fingerprint lockÂ feature was long rolled out on iPhones, and now the feature is being improved upon and it will now be renamed â€œBiometric Lockâ€ and will expand to cover face unlock and â€œother unique identifiers.

In other words, Fingerprint lock will be a Biometric lock, because it will support more ways to authenticate your identity to openÂ WhatsApp.

Face Recognition will be supported if the device has a proper sensor.

Any other unique identifier will be also considered if the fingerprint or face recognition fails.

The above features are still been developed and will be rolled out once it has been completed on Android.