The renders of the two phones are from Steve Hemmerstoffer a.k.a. OnLeaks, and unlike previous leaks which have been released in collaboration with tech sites, the renders of theÂ Galaxy S21Â andÂ Galaxy S21 UltraÂ were posted on Voice. 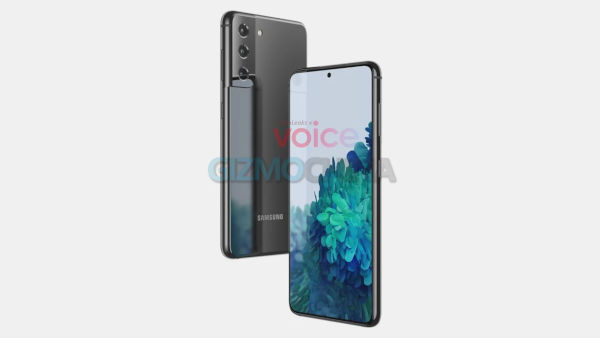 To start with the Samsung Galaxy S21, the company has completely pushed aside the curve on the screen which means the display is completely flat just like that of the Galaxy S20 FE. What has remain unchanged is the hole punch which remains in the center. The display of the device is said to be about 6.2-inches in size.

The back of the Galaxy S21 is where the significant change is. While it still sports a triple camera setup, the camera housing takes on a new design. Unlike that of its predecessor which is â€œfloatingâ€, the camera housing for the S21 begins from the edge, making it look like it is fused to the frame.

Samsung has gone with a different finish for the glass covering the housing which makes it stand out from the rest of the back panel. Another change is the LED flash which is no longer inside the camera housing but now outside. Personally, I think it sticks out like a sore thumb and would be better if housed together with the cameras. An elongated pill-shaped LED flash like that of theÂ OPPO F17 ProÂ will also look better.

The Galaxy S21 still has its power button and volume rocker on the left while the bottom of the phone is home to a USB-C port, microphone, and speaker grille. The SIM tray remains at the top.

The upcoming flagshipâ€™s dimensions are given as 151.7 x 71.2 x 7.9 millimeters. The thickness increases to 9.0 millimeters when you add the camera bump.

The Galaxy S21 Ultra sports a slightly curved display with a centered punch hole for the selfie camera. The screen size has been revealed to be between 6.7 and 6.9 inches.

The glass covering the cameras extends to the edges of the top and left side of the frame too. Inside the housing are four cameras, one of which is a periscope lens, and an LED flash.

The Galaxy S21 Ultra has its buttons and port in the same place as the Galaxy S21. However, while rumors say itÂ will have support for the S Pen, there is no slot for it created on the device. Notwithstanding, this doesnâ€™t mean it wonâ€™t support the S Pen.

ALSO READ:  iPhone 13 Pro Series may not have the 256GB storage version

OnLeaks corroborates that the Galaxy S21 series will indeed launch in January 2021, arriving earlier than the Galaxy S20 series.

Tecno Spark 7 Render Leaks Ahead Of Next Week Launch