The Kirin 9000 Series is a 5G chip design with the capability to handle intensive computations and multi-tasking operations with ease. The chip is the most sophisticated 5nm 5G SoC available, delivering vastly improved performance and power efficiency over its predecessor. It takes over from the Kirin 990 5G built on a 7nm silicon.

The new processor is said to have more than 15.3 billion transistors, the first processor to break the 15 billion transistors mark. This makes it the densest and most full-featured 5G SoC to date. The powerful processor packs a three-level power efficiency architecture with cores running at clock frequencies of up to 3.13GHz. The CPU part has eight cores, including a 3.13GHz Cortex-A77 large core, three Cortex-A77 medium cores each clocked at 2.54GHz. The SoC also has four Cortex-A55 small cores clocked at 2.04GHz each. The base frequency of the chipset is slightly higher than that of the Snapdragon 865 Plus which is clocked at 3.1GHz. Thus, Kirin 9000 is currently the highest frequency mobile phone processor.

Also integrated into the SoC is a 24-core Mali-G78 GPU, as well as an innovative NPU featuring two big cores and one tiny core, taking on-device AI to a new level. The 24-core Mali-G78 GPU is touted to be the most powerful GPU ever seen on a Huawei device. This delivers advanced graphics performance and is complemented by an amazing audiovisual experience for immersive gaming. The architecture exceeds the Kirin 990â€™s Mali-G76 in that the number of cores is increased by half and the performance is upgraded by 60% over the Mali-G76. 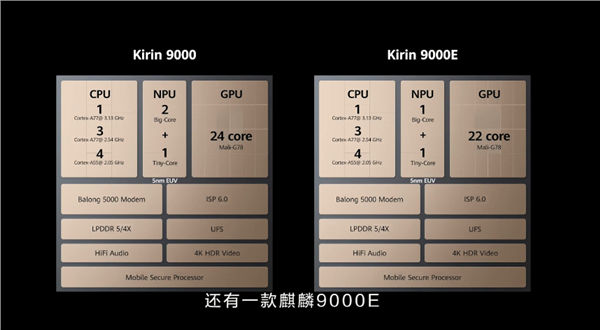 In terms of GPU, Kirin 9000E is a 22-core Mali-G78. In terms of NPU, Kirin 9000E has dual cores (large core and one small core). In other respects, the two chipsets seem to be the same, including the integration of Balong 5000 5G baseband, ISP 6.0, security module, etc. In addition, they are all manufactured with 5nm EUV process, support LPDDR5/4X memory and UFS flash memory, support HiFi sound quality, 4K HDR video, etc.