Samsung is planning to announce a new phone with model number SM-F415F. Since the model has the letter F, it was being speculated that it could be the rumored budget-friendly foldable smartphone.Â  However, recent info has revealed that it is just a mid-range phone. 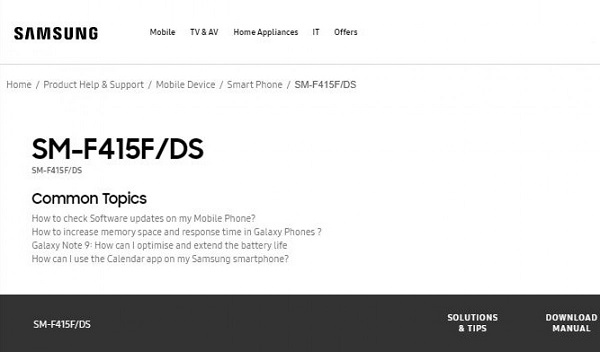 With the launch coming in few days, a user manual that appeared on Samsung Indiaâ€™s support page and it gives revealed the look at the first member of the new F-series – the Galaxy F41. It bears the SM-F415F model number which was previously believed to be a member of Samsungâ€™s Z foldable line.

From the image, the F41 will have a waterdrop notch screen, triple rear cameras, rear-mounted fingerprint scanner and a headphone jack. The schematics reveal a dual speaker setup with the earpiece acting as the secondary speaker alongside a bottom-firing unit.

Looking deep into the manual, we see that the phone will sport wide and ultrawide cameras though the exact sensors are not listed. Speculations point to a 64MP main shooter. It also remains to be seen what the third module will be.

The manual also mentions the phone supports fast charging though it does not specify its speeds. We also get confirmation that the F41 will charge over Type-C and will sport dual-SIMs and a microSD card all at once.

Alongside its manual, the Galaxy F41 also passed through Geekbench revealing its powered by the Exynos 9611 chipset. It managed scores of 348 and 1,339 points on the single and multi-core runs and comes with 6GB RAM.

WhatsApp Web To Soon Get These 3 Major Update