OPPO Unveils ColorOS 11; Here Are All The New Features 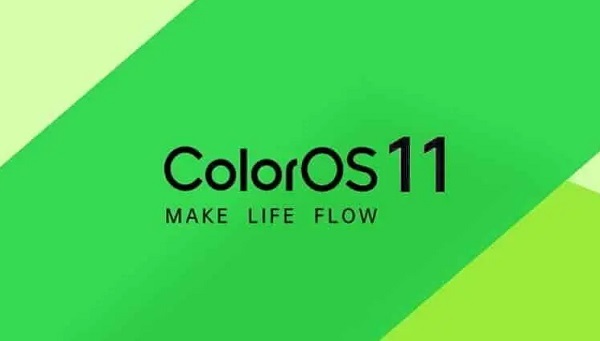 OPPO claims that with the â€œMake Life Flowâ€ concept, ColorOS 11Â offers stock Android features, in addition to rich UI customization options. That being said, let us take a look at all the new features the fresh version of OPPOâ€™s Android skin brings to its smartphones.

With ColorOS 11, OPPO has opened up its Android skinâ€™s UI to be more customizable than ever before. Users can not only use third-party icon packs but also create their own Always-on Display (AOD) styles, aÂ  feature found inÂ MIUI 12Â andÂ EMUI 11. Just like those software, ColorOS 11 too limits AOD to handsets withÂ OLEDÂ displays. 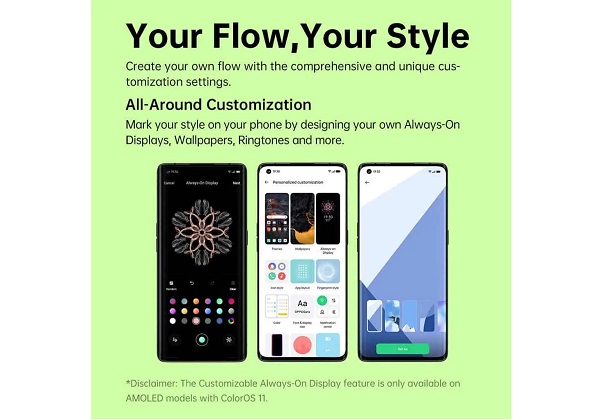 OPPO has also implemented a new Personalizations aka Personalized customization page in Settings just like in OnePlus and Pixel devices as the one-stop destination to customize most of the above-mentioned things. 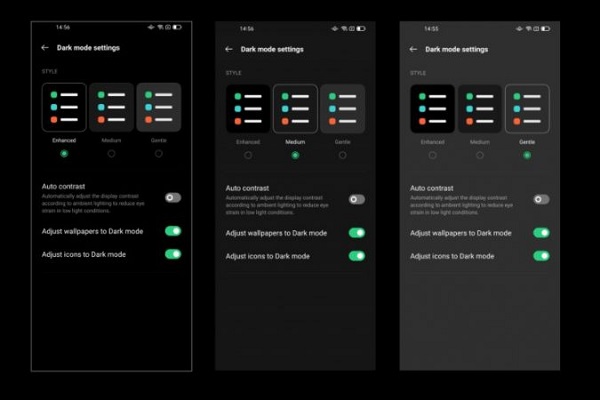 Last year, OPPO introduced 30+ artistic wallpapers from world-renowned artists. This year, it has partnered with Beauty of Science to bring wallpapers based on microscope, macro, and time lapse photographs.

OPPO Relax was introduced inÂ ColorOS 7. The new version in ColorOS 11 comes with a feature called Sound Mix, in which users can select from a wide variety of sounds such as natural, urban, ASMR, and everyday sounds to create a true-to-life whit noise mix to their liking. 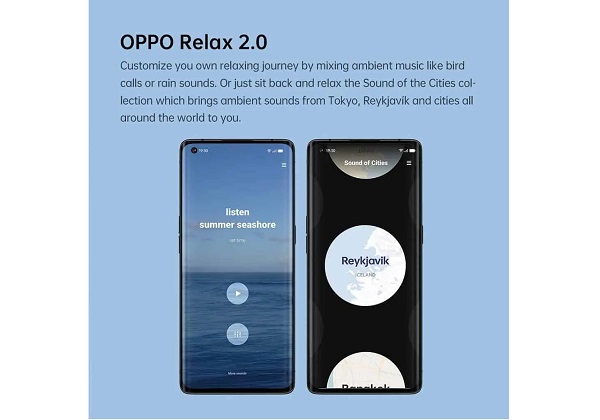 Users can also listen to sounds from cities like Tokyo, Bangkok, and Reykjavik in OPPO Relax 2.0.

ColorOS is known for its Three-Finger screenshot feature, which is now found on many Android skins. InÂ ColorOS 7, the company improved this feature by implementing partial fingerprint functionality, which can be accessed by long-pressing three fingers. 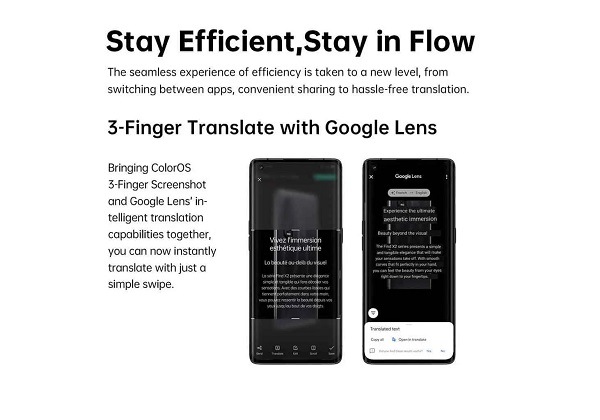 In ColorOS 11, OPPO has partnered withÂ GoogleÂ to bring translation functionality powered byÂ Google Lens. The company calls it â€œThree-Finger Translateâ€. With this feature, users can directly translate the content in partial screenshots while capturing them. 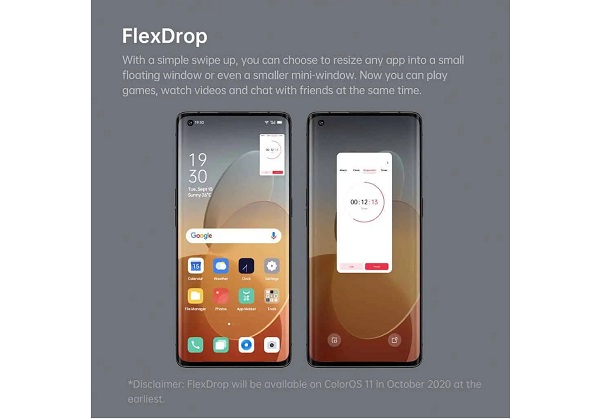 That said, this feature will be only introduced in October. So the devices receiving the update this month will lack FlexDrop.

Private System in ColorOS 11 is similar to Samsungâ€™sÂ AltZLifeÂ inÂ Galaxy A51Â andÂ Galaxy A71Â but at a very large scale. This feature enables users to create a copy of their current system protected by a separate fingerprint or password. 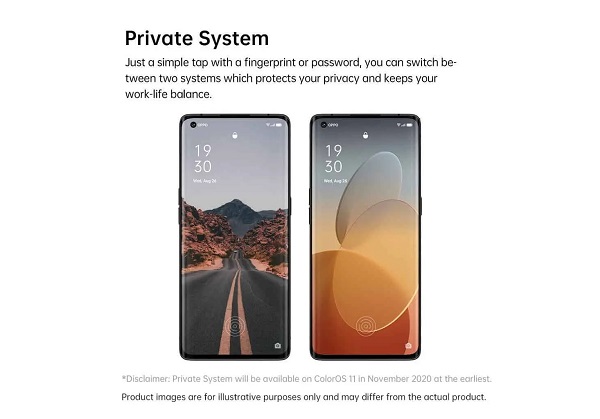 Apps and data are independent in original and Private System. Users also get an option to select the apps they want in the Private System while creating it. Even if they forget to do it, they can install any app of their choice in that space.

On the other hand, Hyper Boost 3.0 keeps battery use under control without comprising the overall system performance. The Smart Resource Allocation in this technology helps in increasing the CPU utilization by up to 30% keeping the power consumptionÂ  as low as 12%.

Super Power Saving Mode helps users utilize most out of the last remaining battery by limiting access to a maximum of 6 apps. OPPO claims 5% battery level can be used for WhatsApp messaging for up to 90 minutes when this mode is activated. 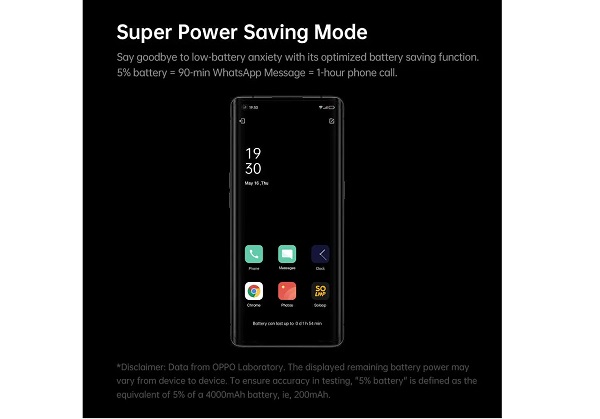 Whereas, Battery Guard helps users in maintaining the battery health by learning usersâ€™ charging habits.This feature is handy for those users who charge their phones overnight. It automatically stops charging the phone when the battery level reaches 80% and continues to fill up to 100% by the time users get up.

Since ColorOS 11 is based on Android 11, it also brings all the newÂ important featuresÂ of Googleâ€™s latest operating system such as Chat Bubbles, Device Control in power menu, One-time Permission, Auto-Reset Permission, Scoped Storage, and Nearby Share. 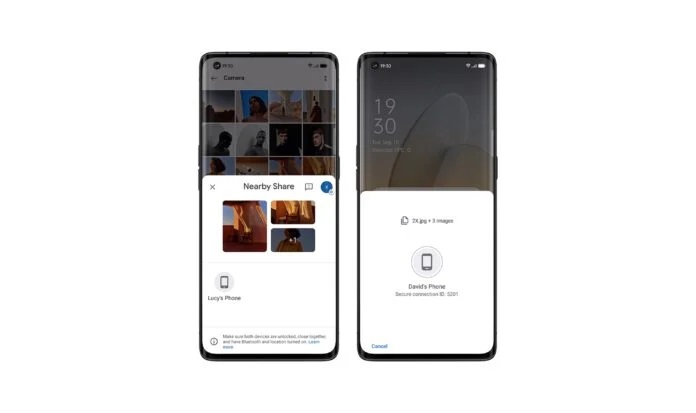 ColorOS 11 Beta rollout for India, Indonesia, Thailand, and other open market regions has begun from September 14 itself. Whereas, in Eastern Europe, the rollout will start from November 2020, followed by Western Europe in December 2020. 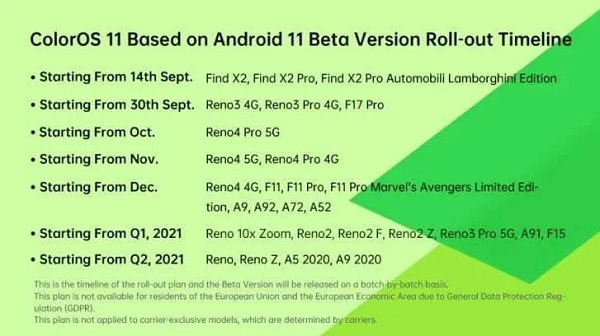 The starting time periods mentioned above are for the first batch of devices. Also, note that they are for beta rollout only. Stable builds may take a little bit more time to arrive.

Here Is The List Of Oppo Phones To Get ColorOS 11

Here Is The List Of Oppo Phones To Get ColorOS 11