In March,Â HMD Global launched the Nokia C2 entry-level smartphone just three months after the Nokia C1 that went official, which was in December. Now, according to a recent info, the Finnish company is planning to launch another C-series phone. The reason behind it is that a smartphone labeled as Nokia C3 has appeared on the Geekbench benchmarking platform.

The Nokia C3â€™s Geekbench 5 listing shows that it scored 149 in the single-core test and 820 in the multi-core test. The codename â€œGamoraPlusâ€ is mentioned in the motherboard field area.

Under the hood, a Unisoc processor takes charge with a base frequency of 1.20GHz and is paired with 3 GB of RAM. There is no information available on the other specs of the phone. 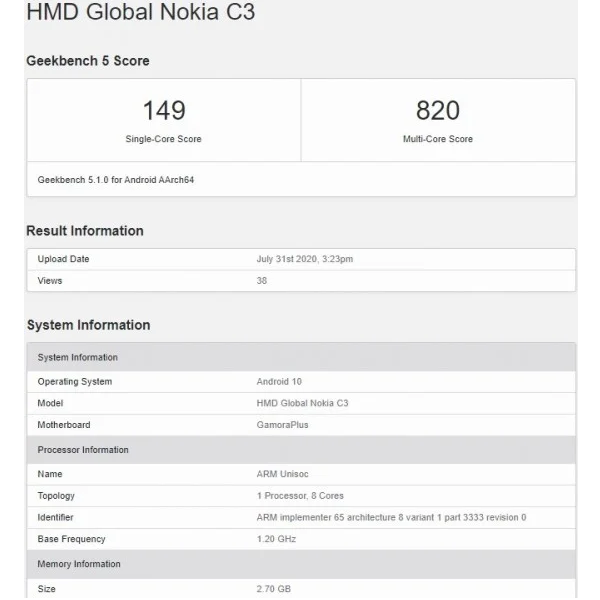 A mysterious Nokia phone with model number TA-1258 recently surfaced in the database of TENAA with full specifications and images. It looks like an entry-level smartphone, but not clear whether the TA-1258 is the Nokia C3 or another phone from the brand.

The Nokia TA-1258 runs on Android 10 OS. It has 2 GB of RAM, 32 GB of built-in storage, a microSD card slot and a battery of 3,040mAh capacity. It has a front camera of 5-megapixel and a rear camera of 8-megapixel. Since this phone has received TENAA certification, it is expected to go official on Aug. 4 in China.

Checkout The Best 6 MiFi Devices With A Big Battery