By Andre Falana On Aug 20, 2020
Share
Join Us On Telegram
Related Posts

Earlier this year, Facebook revamped its user interface on the web with a major redesign. The redesign brought a dark mode and made the overall experience better with bigger fonts. The social networking giant is now all set to drop the classic Facebook interface this September.

The company first announced the new Facebook UI in May last year at its F8 developer conference. It started testing the UI in betaÂ last October, followed by a wider rollout this May. 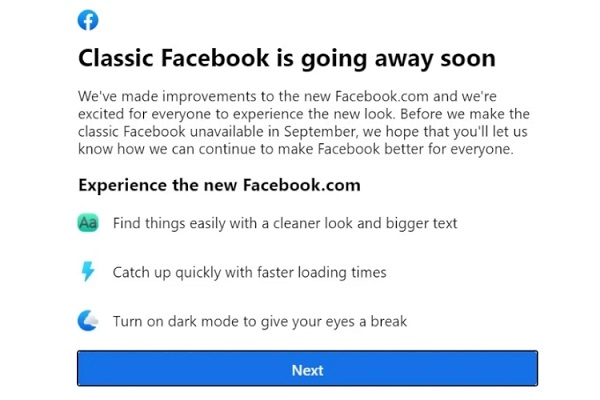 Until now, Facebook offered its users with the option to choose between the classic UI and the modern UI. With this change, users will have no choice other than getting used to the redesigned website (orÂ delete Facebook).

â€œWeâ€™ve made improvements to the new Facebook.com and weâ€™re excited for everyone to experience the new look. Before we make the classic Facebook unavailable in September, we hope that youâ€™ll let us know how we can continue to make Facebook better for everyone,â€Â reads a pop-up on Facebook.

In addition, the company is seeking feedback from Facebook users who are switching to classic UI from the newer version. Facebook wrote;

â€œBefore the new Facebook.com becomes the default experience, we want to learn more about how we can improve.â€Â

Although there’s no word yet on the exact date, the transition will happen sometime in September. If youâ€™re a Facebook user, you should probably switch to the new UIÂ if you donâ€™t want to be forced to do so.

That said, if youâ€™re among those who started using Facebook before it became too mainstream, you should consider spending the upcoming weeks on the classic Facebook interface since you will not be seeing it again, except in screenshots.

Oppo A53 2020 Specifications and Price

Nokia 3.4 Appears On Geekbench With a Snapdragon 460 chipset