While some markets are even yet to get the Note 9 series, and Redmi Note 10 series are already preparing to set the media ablaze. Xiaomi seems to enjoy the way it releases another series while the previous still looks pretty fresh in the market. For the past couple of years, the company is used to two new Redmi Note generations every year and apparently this will happen again.

During the first half of 2020, Redmi announced a plethora of handsets composing the Redmi Note 9 series. For the second half, we believe that the company is preparing the biggest entry for the series in the form of Redmi Note 10. You might be wondering, why is the Redmi Note 10 so special. Well, it might be the first Redmi Note phone to come with 5G connectivity.

A smartphone bearing Redmi Note 10 moniker has been spotted on the benchmark site,Â AI benchmark. The smartphone did not only appear on the list but find itself in the second position. Currently, the only device that outperforms it is the vivo iQOO Z1 which has the MediaTek Dimensity 1000+ processor.

The Redmi Note 10 is powered by the Dimensity 820 SoC that also comes from the Taiwanese chipset maker. The Dimensity lineup has the best chipsets made by MediaTek to the date. They bring performance and 5G connectivity and are quite affordable.

Redmi Note 10 Is The First Note With 5G Support

The listing was first noticed by the popular leakster Digital Chat Station. Judging by the leak, the Redmi Note 10 will have the same performance found in the China-exclusive Redmi 10X 5G and Redmi 10X Pro 5G. Since these two are still in China, the Note 10 might come as their rebranded form with this chipset.

Aside the Dimensity 820 SoC, the phone has 8GB of RAM and runs Android 10. The listing reveals that it was benchmarked on Monday, July 20. Of course, we canâ€™t take this benchmark listing as undeniable proof of Note 10â€™s existence, but it makes sense. 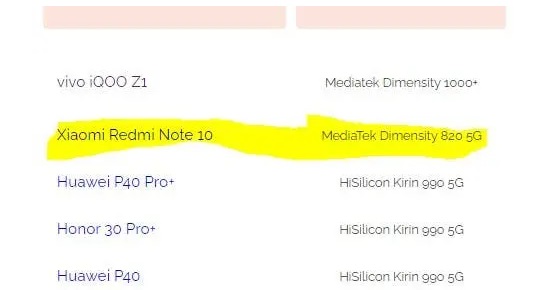 Xiaomi could be performing the first tests on a device that still is in development. It may still take several months to come. Moreover, weâ€™re expecting more than just a vanilla Note 10. This year, Xiaomi introduced three Note 9 smartphones. Worth noting that having the Dimensity 820 in the â€œvanillaâ€ or â€œbasicâ€ Note 10 is a good thing. This chipset easily outperforms Qualcommâ€™s Snapdragon 765G and breaks the 400,000+ barrier on AnTuTu. We could even see a Pro variant with Dimensity 1000+ or even a Qualcomm chipset.

It may be soon for a Note 10, but we canâ€™t forget the fact that the Redmi Note 8 series was introduced in August last year. So, we wouldnâ€™t be surprised to see Note 10 series before the end of Q3 2020.