The OnePlus Nord is expected to be launched next week as the company prepares its return to the mid-range segment after a gap of exactly five years. However, the phone might not be the only mid-ranger from the company this year. The reason for this speculation is because of a newly spotted OnePlus device on Geekbench, reportedly powered by the new Snapdragon 690.

t also comes with 6GB of RAM and runs Android 10. Online reports are referring to the device as the â€˜OnePlus Nord Liteâ€˜. However, thereâ€™s no official confirmation about its name just yet. 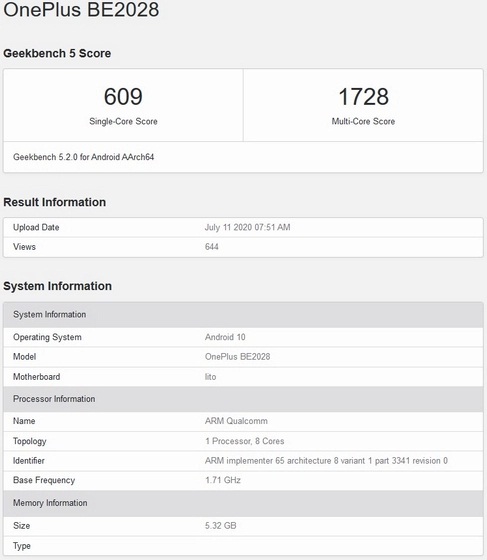 Unveiled last month, the Snapdragon 690 is a lower mid-range chipset with support for dual-mode 5G networks. Itâ€™s expected to battle with MediaTekâ€™s newly-announced Dimensity 600 and, will likely bring 5G handsets to the sub-100,000 naira segment in Nigeria and the sub-$300 segment globally. In fact, with aggressive pricing from the likes of Xiaomi and Realme, we might even see sub-Rs. 80,000 naira 5G phones sporting either of the two chipsets by the end of this year.

Meanwhile, the latest discovery means that OnePlus may offer not one, but multiple mid-range smartphones this year. It will be interesting to see how that plays out, given that the company has largely stuck to premium devices up until now. Either way, thereâ€™s no more information on the upcoming device at this point. However, we hope to get more info about it in the days ahead.