The Chinese smartphone brands have started introducing their next-generation fast charging technologies as we enter the second half of the year. OPPO confirmed that it will be announcing the 125W super flash charge technology on Wednesday. However, rival brand iQOO surprisingly launched its 120W Ultra-Fast charging technology today. The new charging tech from the brand can completely a charge 4,000mAh battery phone in just 15 minutes.

iQOO already offers fast charging solutions such as 33W, 44W, and 55W on its smartphones. The Chinese brand today unveiled the 120W Ultra-Fast rapid charging technology that promises to charge 50 percent of a 4,000mAh battery in 5 minutes and it can be fully charged in 15 minutes. 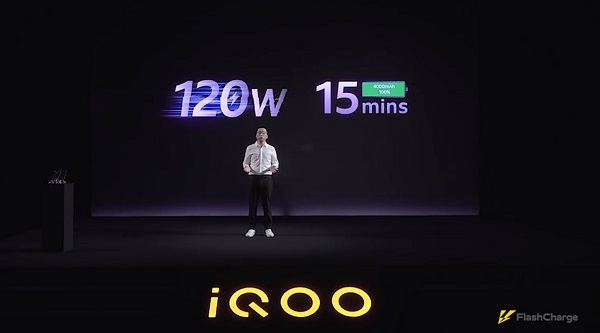 vivo had launched its 120W FlashCharge technologyÂ at the Mobile World Congress Shanghai 2019 tech exhibition last year. However, it was not a commercial announcement. Also, the technology is yet to be mass-produced. Hence, todayâ€™s announcement by iQOO can be called as the worldâ€™s first 120W fast charging technology.

At the launch event, the iQOO Product Manager demonstrated the 120W rapid charging tech. The 4,000mAh battery phone has a dual battery system featuring an industry-first 6C cell, each one measuring 2,000mAh in size. Both batteries charge at 5V/12A (60W) by means of a customized chip to achieve a total charging speed of 120W with 97 percent charging conversion rate. 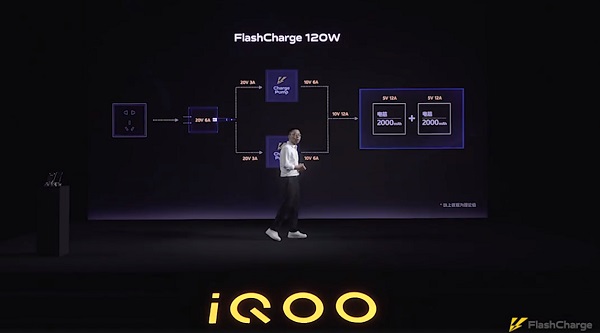 For safety and stability, the charging adapter will come equipped with array type pole structure cell impedance. Phones featuring the 120W ultra-fast charging will come with super VC liquid cooling technology to regulate the internal temperature of the device.

According to a leakster, a mysterious iQOO phone with 120W ultra-fast charging is already in works. He claims to have seen the measured data before and he found that the charging tech can fast enough to achieve 80 percent battery capacity in just minutes.

He revealed that the mysterious iQOO phoneâ€™s mass production has started, and it will debut next month. Could it be theÂ rumored Snapdragon 865+ powered iQOO Pro 3 5G phone? Hopefully, new leaks will reveal the identity of the device in the coming days.