Just when you we are still trying to catch our breathe after the excitement that follows the announcement of vivo iQOO 120W fast charging technology and the revelation of OPPO’s 125W fast charging options, another one surfaced. Huawei and its sub-brand have just revealed their own out tech too. Well, today, Honor has announced that it will soon launch a new fast charging technology. This time around, it will be used for the gaming notebooks, reaching 200W fast charge level.

According to the Weibo blogger @Ark, the upcoming gaming notebook from Honor with a codename of FRD will feature a power adapter of 200W. The specific network information shows 20V voltage, 10A current, and the model is HW-200A00P00. 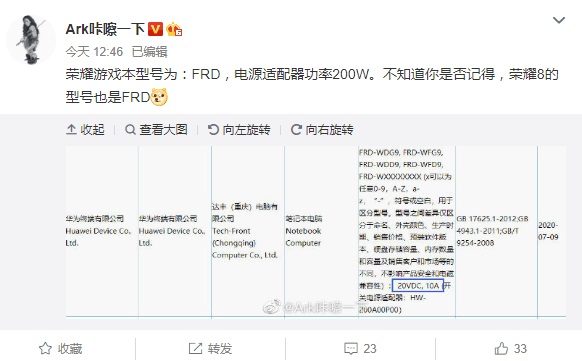 However, the power of 200W is not the highest in the gaming notebooks niche. There are even models reaching 230W. However, the Honor 200W adapter should be based on the USB-C + PD route. Thus, we wonder whether it can reduce the charger size to a certain extent. After all, many gaming notebook chargers are still bulky and not portable at all.

Honor will hold a press conference on July 16. At the event, a new generation of notebooks will be officially launched, including the new Honor MagicBook Pro on the AMD platform as well as Honorâ€™s first gaming notebook. The former will support a new generation of 65W fast charge. And we guess the latter should come with a 200W support. And as the company claims, due to the former accessory, the laptop will charge about 50% in 30 minutes.

The Honor MagicBook AMD versionÂ was spotted in the 3DMark databaseÂ (mainboard number KLVL-WXX9-PCB). So, we can learn about many features of the upcoming laptop. There are two main versions:

Among them, the maximum probability of memory is directly soldered to the motherboard, which is not replaceable or upgradeable. But we believe that even the 8GB version will be dual-channel. However, unfortunately, the frequency is only 2666MHz.

How To Enable Dark Mode On Google Docs, Sheets or Slides