The arrival of the Google Pixel 4a mid-range phone is almost giving its pixel fans insomnia. While some rumors claimed that the Snapdragon 730 powered smartphone will launch this month, some contradictory reports says we should be expecting the phone in October. Previous reports have claimed that Google could announce the Pixel 5 and Pixel 5 XL phones in October. However, a fresh reportÂ claims that the search giant will not be presenting two phones such as Pixel 4a (5G) and Pixel 5 soon, and it will not be launching the Pixel 5 XL handset.

Dylan RousselÂ fromÂ 9to5GoogleÂ scoured through the code of the latest beta edition of the Google Search app and came across the codenames of the entire Google Pixel lineup for this year. As shown in the below image, Bramble is the codename of Pixel 5 whereas the Pixel 4a (5G) is codenamed as Redfin. Initial reports had claimed that these handsets could be debuting as Pixel 5 and Pixel 5 XL. 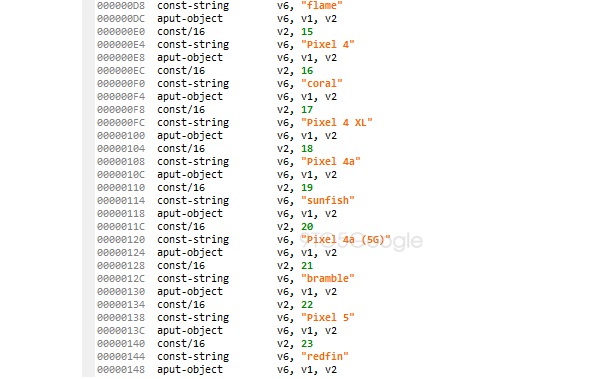 As earlier reports have revealed, the Sunfish codenameÂ belongs to the upcoming Pixel 4a handset. TheÂ Pixel 4a XLÂ and Pixel 5 XL are not on the list. This suggests that the search engine giant has not planned to launch these phones this year.

The Bramble phone i.e. the Pixel 5 is rumored to be equipped with Snapdragon 765 chipset and isÂ not a flagship phone.Â The Pixel 4a (5G) could be powered by a less powerful 5G chipset. Qualcomm has recently launched the Snapdragon 690 5G that brings 5G capabilities on affordable devices.

It remains to be whether Google uses SD690 on the Pixel 4a (5G). Even if the Pixel 4a (5G) arrives with SD765G, the company may offer it with cheaper build materials like plastic whereas the Pixel 5 may arrive with aluminum and glass chassis. Since the hardware information for Pixel 4a (5G) and Pixel 5 are just assumptions, it is advisable to wait for further reports to know more about their specs.