The Asus ROG Phone 3 is expected to make its official debut in just a few days away. It is one of the most anticipated gaming phone of 2020 and it will be announced on the same day we will be seeing first gaming phone from Lenovo under the Legion lineup.

Now, we want to tell everything we know (rumor roundup) about the ASUS ROG Phone 3, thanks to numerous leaks and rumors. Through these speculations we have been able to gather most of the specifications of the upcoming gaming phone, and its design. In this rumor roundup, you will get all the known info about the specifications, features, and launch of the ASUS ROG Phone 3. Please note that many things are not officially confirmed, so take rumors with a pinch of salt.

ASUS ROG Phone 3: What We Know So Far

Thanks to renders published by the known leakster Evan Blass and several other leaks, we know how the Asus ROG Phone 3 will be when it comes to the aesthetics. 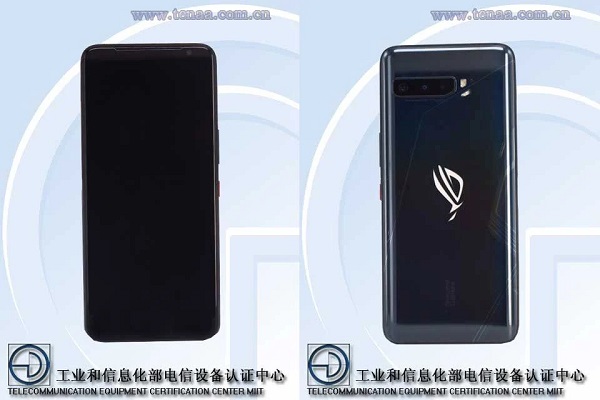 On the right edges of the ROG Phone 3, you get two buttons and an additional USB-C port. There is a richer camera module as well, but we will talk about it in the paragraphs below. The TENAA listing revealed that the ROG Phone 3 measures 171 x 78 x 9.85 mm and it weighs 240 grams. TENAA only revealed the existence of a Bright Black color variant: we do not know whether or not the Taiwanese giant will launch different color variants. The phone will also feature four different gesture controls built into the AirTrigger: on the frame of the phone, there will be ultrasonic pressure-sensitive regions that can be mapped to emulate a tap on the screen. 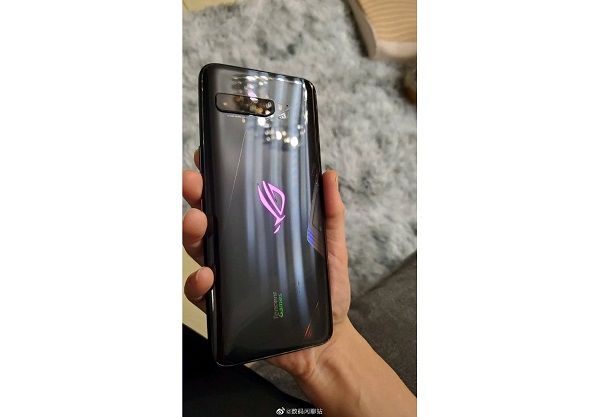 The Asus ROG Phone 3 will be powered by the new Snapdragon 865 Plus mobile platform and it will be the first phone launched with this SoC alongside the Lenovo Legion phone. In case you do not know, Snapdragon 865 Plus is actually the best flagship chipset released by Qualcomm and it offers a 10 percent performance boost if compared to the Snapdragon 865 in both CPU and GPU performance. It is even the first mobile chipset to offer a clock frequency above 3 GHz (3.1 GHz, to be accurate). The Snapdragon 865+ is bundled with a Snapdragon X52 external 5G modem supporting all the 5G spectrum, including mmWave (SA and NSA).

As revealed by benchmarking platforms and leaks, the Snapdragon 865 Plus will be paired with up to 16 GB of LPDDR5 and up to 512 GB of UFS 3.0 internal storage. The phone was spotted on AnTuTu where it recorded a marvelous benchmarking score of 646,310 points, identified by the model number ASUS_I003D. The result refers to the top-end configuration with 16 GB of RAM and 512 GB of internal storage, but it seems there will be other configurations with 8 and 12 GB of RAM, as well as 128 and 256 GB of internal storage. On Geekbench, the handset scored 910 points in single-core and 3229 points in multi-core with Snapdragon 865+ and 12 GB of RAM. 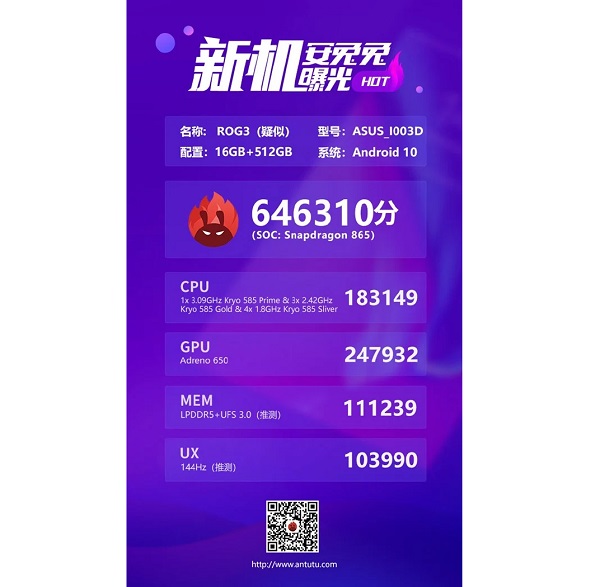 The Asus ROG Phone 3 will run Android 10 out of the box, customized by the ROG UI. Note that the ROG UI found on the ROG Phone 2 offered the chance to switch between a customized user interface and stock Android, which is a very interesting and useful feature. Bluetooth SIG confirmed that the phone will support Bluetooth 5.2, besides Wi-Fi 6.

The display of the Asus ROG Phone 3 will be an AMOLED panel with a diagonal of 6.59 inches and a 19.5:9 aspect ratio. It will sport a Full HD+ resolution with 1080 x 2340 pixels, as well as a refresh rate up to 144 Hz, the highest ever seen on a phone. The display will not be the only light on the phone: on the rear side, there will be a LED-lit ROG logo. As for now, this is all we know about the display of the ROG Phone 3. Its predecessor ROG Phone 2 also came with the Gorilla Glass 6 protection by Corning and it carried the HDR10 certification. So it is legit to expect these two specifications on its successor as well.

While the ROG Phone 2 packed a dual camera setup on the rear side, its successor ROG Phone 3 will sport a triple camera on the back. The main sensor of the triple camera will be a 64 MP lens. We expect it to be a midrange camera phone, nothing surprising. The front camera will have a 13 MP resolution. We do not have any info about the secondary sensors of the rear camera department, but we believe they will include an ultrawide sensor (finally).

The ASUS ROG Phone 3 is expected to be powered by a whopping 6,000 mAh battery just like its predecessor, which will guarantee a very long battery life. The battery will support a 30W fast charging technology, not the fastest one, especially for a 6000 mAh battery, but enough. Further, there will be a secondary USB-C port which will allow charging the phone without disturbing the gameplay while the handset is in landscape mode. 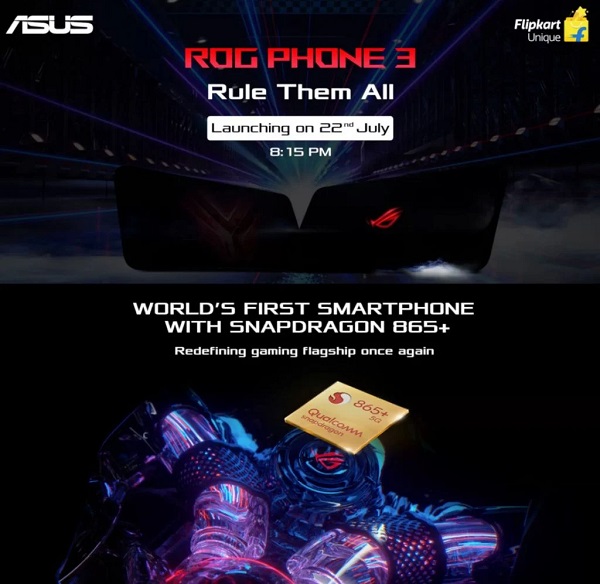 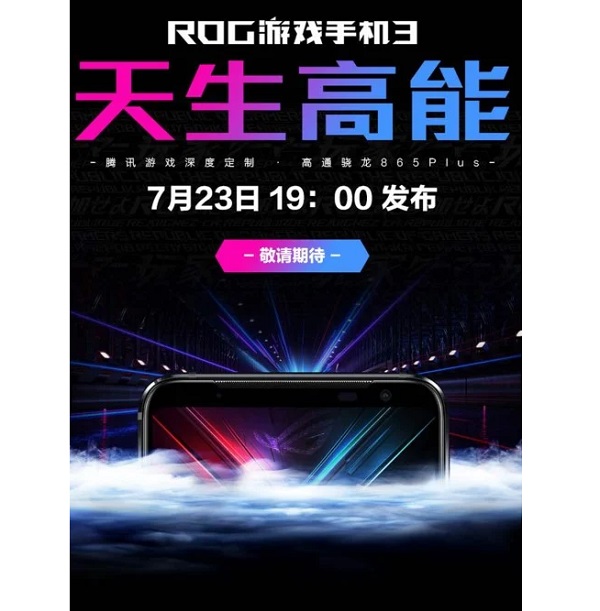 The day after, on July 23, it will be launched in China: it is already available for reservations on JD.com and it will go official at 7:30 PM local time in China.

Well, sadly, there is still no word on its pricing. You will get an update related to that once we know more.