One of the key reasons most ardent phone users considers before pitching their tent with a phone maker is usually the speed at which the OEM pushes updates to its models. Phone manufacturers are increasingly putting this into perspective for their old and new models. The result is the increased pace at which the latest Android 10 operating system was adopted. An info released on the Android Developers blog Thursday reveals that Android 10 recorded the fastest adoption of any Android update till date.

Google has since stopped releasing the comprehensive Android Distribution chart but this line graph shows the adoption rate for the last four major Android updates namely Android 8.0 Oreo, Android 8.1, Android 9.0 Pie and Android 10 since they were launch.

Android 10 has so far achieved 28% faster adoption rate than Android 9 Pie with the total number of devices running the latest Android version put at 100 million barely five months after launch. At present, Android 10 runs in over400 million devices worldwide. 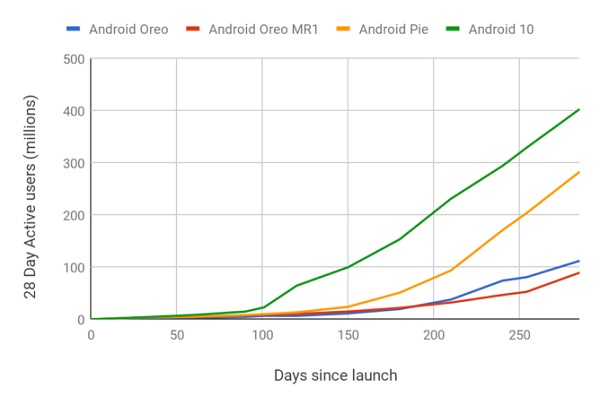 Google’s initiative for faster adoption of new OS versions is responsible for the progress. The tech giant’s Project Treble, Mainline, and GSIs were introduced at some point with the Project Treble and Mainline aimed at further decoupling the OS components from Android itself.

Project Treble gives phone makers the leverage to deliver updates devoid of considerations about deeper hardware drivers. This helps to trim down the amount of time it takes to design and build software updates for new devices. The effect was felt with the adoption speed for Android 9.0 Pie. This latest chart shows progress is being made at a rapid pace.