As the platform continues to grow as an essential platform for real-time conversations, Twitter is introducing new ways to share your thoughts and opinions. The company recently announced Instagram Stories-like â€˜Fleetsâ€™ featureÂ in India. And now, Twitter is testing out audio tweets with iOS users. Yeah, audio tweets where you can record a message and share it with your followers.

â€œSometimes 280 characters arenâ€™t enough and some conversational nuances are lost in translation. So starting today, weâ€™re testing a new feature that will add a more human touch to the way we use Twitter â€“ your very own voice,â€Â says theÂ official blog post. 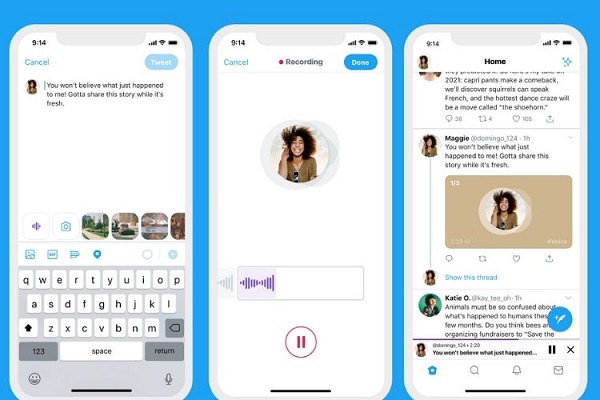 To tweet an audio clip, users will open theÂ tweetÂ composer and tap on the new audio tweet icon.

This will open the new Twitter audio recording interface, which will allow users to start recording their sound clips.

According toÂ Twitter, if you reach the time limit for an audio clip, it will automatically start a second audio tweet and create a thread with all of these voice recordings.

Once users have finished recording their audio clip (or tweets), they will need to tap the Done button, which will return them to the traditional tweet composer screen.

Audio tweets automatically create an image in which users will need to tap to listen to the clip.

â€œCreating voice Tweets will be available to a limited group of people on Twitter for iOS to start but in the coming weeks, everyone on iOS should be able to Tweet with their voice,â€ said Twitter.

Rolling out today on iOS, you can now record and Tweet with audio. pic.twitter.com/jezRmh1dkD

It confirmed that all users will be able to listen to audio tweets, regardless of the platform.

It is unclear at this point when Twitter plans to roll the feature out on Android devices; but for now, iOS users should continue to rock audio tweets.

Adobe Flash Will Be Officially Shut Down On December 31