On Tuesday, Realme celebrated a huge milestone achieved by the Realme C-series. The affordable lineup of smartphones has over 13 million users now after its introduction in late 2018. Back in February, the company announced the Realme C3 which was a very important step for the lineup. The handset was not just affordable, it also offered an impressive performance thanks to the gaming SoC Helio G70 which boasts an Octa-Core with the highlights on a 2x Core cluster with Cortex-A75 cores. Now, the company is gearing up for a new super-affordable member of the series, yet impressive.

The Realme C11 was spotted recently on Realmeâ€™s Malaysia account on Facebook. According to the teasers, the handset has a bigger battery and provides endless fun. One of the teasers also suggested that itâ€™s a smartphone for gaming, but we donâ€™t think so.

According to several rumors, the device will be powered by the Helio G35 chipset. However, this chip simply can fit in what we expect from a game-oriented smartphone. And now, the Realme C11 ran GeekBenchÂ and that gives us a better insight into this chipsetâ€™s performance. Moreover, someone from the Realfans Vietnam Facebook group posted an unboxing of the handset. 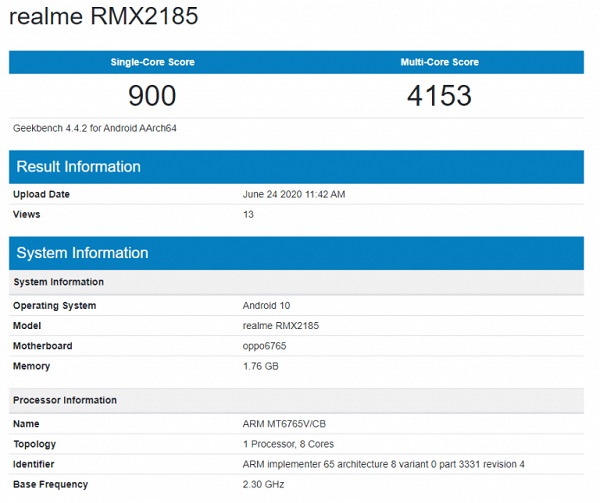 GeekBench reports the motherboard as â€œoppo6765â€ if you recall, Realme was an Oppo subsidiary. The Helio G35 or MT6765/VCB scored 900 points on the single-core tests and 4,153 points on the multi-score. Of course, these results were achieved with the GeekBench 4.4.2. According to reports, the G35 is a Octa-Core CPU with 8x Cortex A53 cores. The CPU runs at 2.3GHz but thatâ€™s not nearly enough to match the Helio G70 with its bit Cortex-A75 cores. We have been impressed with all newer MediaTek chipsets so far, but the Helio G35 looks like a return to the old formula. However, it still is better than the companyâ€™s old unnamed Quad-Core chips.

The Benchmark also suggests 2GB of RAM. The C3 basic version also brings 2GB of RAM, but the chipset is better. For that reason, we expect the Realme C11 to be much more affordable than the Realme C3. But also, we expect it to have a maximum capacity with 3GB of RAM and 32GB of RAM. The last bit indicates Android 10 in tow, which also confirms Realme UI 1.0 on top.

As for the unboxing video, it reveals a yellow box with Realme C11 keeping Realmeâ€™s tradition. Unfortunately, the display only appear for a few seconds, but thatâ€™s enough to spot a teardrop notch for the selfie camera. On the back, we have a Square-ish camera bump comprising two cameras in the top-left corner. The handset also has a vertical stripe on the left part with the Realme Logo.

The Realme C11 will be revealed in the next week on June 30. Itâ€™s a global smartphone.