The race to reach the finish line and gain the heart of gamers is getting more serious between Microsoft Xbox Series X and Sony PlayStation 5. These consoles are expected be officially available at the end of the year but tensions are already high.

Currently, hardware specification of both consoles is already in public. In this regard, the Xbox Series X appears to be ahead on paper. Presently, the Xbox Series X seems to have revealed more information than Sony PS5. However, PlayStation will hold an online press conference at 4 a.m. on June 12. It is expected that the company reveal more information regarding this console.

Just few hours before the press conference, a very vital information of this console has already hit the internet. Sonyâ€™s confidentiality work is quite good. For this reason, we have no knowledge of the two most important pieces of information about the PS5 â€“ appearance, and price. These are the information that many seek to get at the press conference tomorrow. However, we now have a leak for the possible price of the Sony PS5 and the leak is from Amazon.

Recently,Â AmazonÂ in theÂ UK suddenly launched a landing page for the Sony PS5. The weird thing about the landing page is that it comes with a price tag. The Amazon UK page revealed that this console will sell for Â£599 ($759). Itâ€™s interesting because this price falls within the speculations. According to previous reports, the Sony PS5 can sell for anything between $400 â€“ $800. The Â£599 ($759) price tag seems accurate and reasonable. Thus, netizens can not help but believe that this could be the PS5 real pricing. 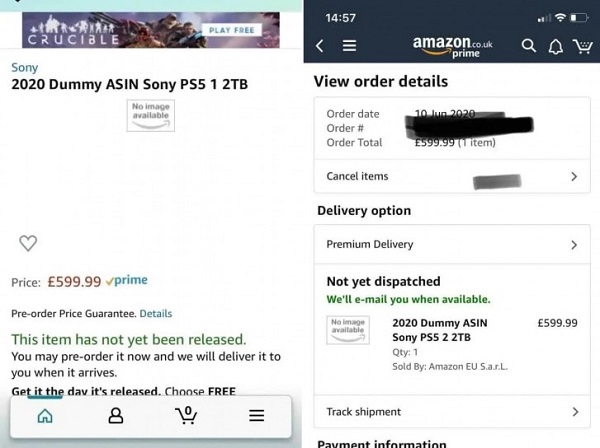 As convincing as the information is, it is advisable to take it with a pinch of salt. This is because there is no official confirmation of the price. Secondly, the page was quickly taken down by Amazon but not before fans got a screenshot. Thirdly, the PS5 hard drive on the Amazon page starts at 825GB instead of 1T. These are some discrepancies that do not conform to what we will expect from an official landing page.

In addition, the British Amazon also put PS5 game placeholders. There also PS5 game listings on Amazon UK, games from Konami, Rockstar, 2K, Koch. Rockstar listing is delisted but can confirm itâ€™s on Amazon.Â There is no doubt that the starting price of PS5 will be higher than that of PS4. However, the current leak price is in a reasonable range and does not exceed expectations too much.