Back in March, Nokia announced its first 5G phone following the cancellation of this year’s MWC. It wasnâ€™t clear when Nokia would begin to sell the new handset. According toÂ GSMArena, the Nokia 8.3 5G smartphone, has officially appeared on the Amazon Germany website. This also means the new handset will also be officially released soon. 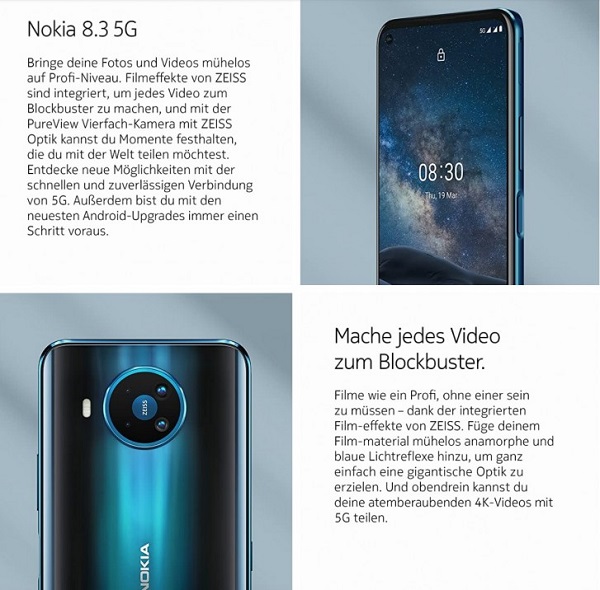 The phone features a 6.81-inch LCD screen with a punch hole 24MP selfie camera. The main quad-camera setup consists of a 64MP main camera with Zeiss lens hardware, a 12MP ultrawide, and 2MP sensors, each for macro shots and depth sensing.

The Nokia 8.3 5G is powered by the Snapdragon 765G chipset with support for 5G networks. Thereâ€™s 6GB or 8GB of RAM along with either 64GB or 128GB of onboard storage. Thereâ€™s an integrated fingerprint scanner in the power key and comes with Android 10 out of the box.

The Nokia 8.3 has its marketing graphics listed, but the phone isnâ€™t yet available for sale. Perhaps an earlier launch may be expected than originally anticipated. The Nokia 8.3 5G will go for â‚¬600 in most European markets and will retail for Â£500 in the UK.

Advertisement
ALSO READ:  The Nokia Maze Pro Lite 2020 Might Actually Be A Hoax After All
Advertisment