The specs and dimension of the Samsung Galaxy M01 has leaked through in a schematic provided by the guys at Android Pure. The drawing looks a quick start guide or something inside an instructional manual for the smartphone. It reveals a few of the deviceâ€™s specifications and the phoneâ€™s dimensions.

The phone comes with the very same chipset as that of the Galaxy A01 â€“ The Snapdragon 439. Itâ€™s actually an outdated chipset, the MediaTekâ€™s Helio G70 would have been preferred. Nevertheless, it should still provide acceptable performance for non-demanding users. The chipset is paired with 3GB of RAM and 32GB of Internal Storage. 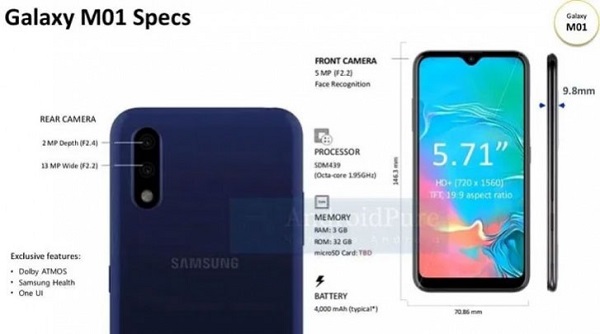 Other features include Dolby Atmos, Samsung Health support, and Face Unlock. Interestingly enough the microSD presence is listed as â€œTBDâ€. Perhaps the schematics are still work-in-progress, or in the worst-case scenario, the material was manipulated.

TheÂ latest reports suggestsÂ that the Galaxy M01 may go for a low price of INR 9.000 (~$118) when it launches in India. Both the Galaxy M01 and M11 (part of the same series) are expected to be announced in India sometime in the beginning of June.

vivo NEX 2 Leaked Images: Will Have Two Screens and Three...

Realme C11 Could Be The First Phone To Feature MediaTek Helio...