A recent report had disclosed that Microsoft has postponed the launching of Windows 10X OSÂ and the dual-screen PC named Surface Neo. As far as Surface Duo dual-screen Android phone is concerned,Â it was reported in MarchÂ that the company finalized the specs of the Surface Duo and is optimizing its OS. It was speculated that the device may go official in summer. There is no fresh information on Surface Duo release date, but a new report onÂ Windows CentralÂ has revealed fresh details on its specifications. 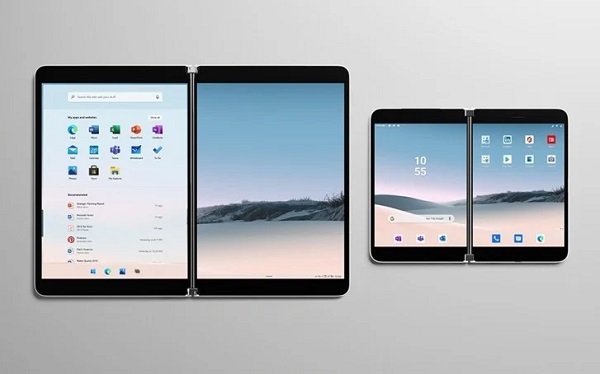 The publication has learnt from its sources that the employees at Microsoft can test the device in real world. This indicates that the device is almost ready and may debut before the end of the year.

The Surface Duo has two equal-sized 5.6-inch AMOLED displays. Each screen offers a 4:3 aspect ratio, 1800 x 1350 pixels resolution, and 401ppi pixel density. The tablet is loaded with Android 10 OS and is expected to come with apps from Microsoft. The company is working on finalizing the apps that will ship with the smartphone by June. Microsoft apps can be spanned across both screens and they will also support drag and drop feature between both screens.

It will not be featuring the latest snapdragon 865 mobile platform. Â The company has reportedly settled for last yearâ€™s Snapdragon 855 for the dual-screen phone. Hence, it will lack support for 5G connectivity. The SoC will be coupled with 6 GB of RAM.

The Surface Duo is expected to arrive in 64 GB and 256 GB storage sizes. It is unlikely to feature a microSD slot. It will draw power from a 3,460mAh battery that will be coupled with fast charging technology through USB-C.

For security, it will be equipped with a fingerprint reader. It has a rear camera of 11-megapixel with f/2.0 aperture and a pixel size of 1.12micron. It is speculated that the device lacks support for wireless charging and NFC. There is no word on the pricing of the device.

Next iPhone Series To Have Screens With Refresh Rates Up To...