Samsung has announced a number of its 2020 Galaxy A-series models for the US market. The A-series smartphones launched includes the much-talked Galaxy A71 5G, the Galaxy A51 5G and the Galaxy A21.

Some of these models will go on sale on tomorrow (April 9) in the US while others, including the Galaxy A71 5G and Galaxy A51 5G, are scheduled to be released in the summer. 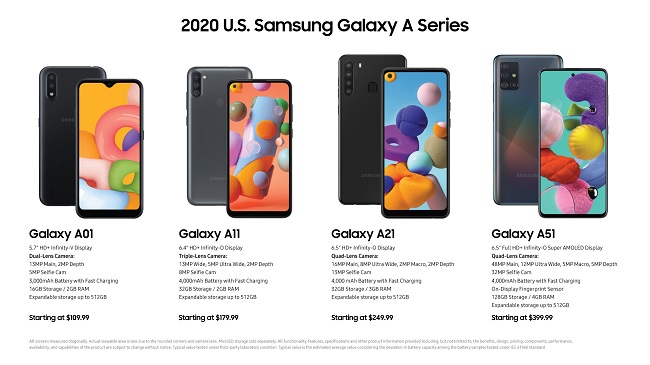 The Samsung Galaxy A71 5G is an upgraded version of the Galaxy A71 that was launched earlier this year. The phone has the same design with its sibling and the 5G chipset onboard this new variant is the only distinguishing feature.

As for the specs, the Galaxy A71 5G features a 6.7-inch Super AMOLED display FHD+ resolution of 1080pixels. The device utilises a punch-hole design which houses a 32MP selfie camera.

At the rear, the Galaxy A71 5G packs a Quad camera setup. The setup consists of a 64MP main camera paired up with a 12MP ultra-wide camera, a 5MP macro cam and finally, a 5MP depth sensor.

Samsung didn’t reveal the chipset onboard the device but considering that the 4G version is powered by a Snapdragon 730 chipset, this model is likely using the Snapdragon 765G SoC. The phone gets its juice from a 4,500mAh battery and supports 25W fast charging.

Samsung is also scheduled to release the 5G version of the Galaxy A51 this summer. The major difference with this model is the Exynos 980 chipset onboard that model which will usher in 5G connectivity. The phone will come in at $500 which is just $100 higher than the 4G version.

Samsung also unveiled the Galaxy A21 which has not been launched anywhere else. The phone features a 6.5-inch display with 720p+ (HD+) resolution. The device crams a massive 4,000mAh battery under the hood and has support for 15W fast charge.

The phone’s processor wasn’t mentioned but it pairs with 3GB of RAM and there is 32GB of storage onboard. The device has a microSD card slot which means the storage is expandable.

On the camera end, the Samsung Galaxy A21 packs a quad-camera arrangement on the back. The cameras include a 16MP main sensor, an 8MP ultra-wide and 2MP macro cameras and finally, a 2MP depth sensor. For selfies,m the Galaxy A21 utilises a punch-hole design which houses a 13MP sensor.

In addition, Samsung announced two cheaper models that adopt the moniker Galaxy A01 and Galaxy A11. The Galaxy A01 is an entry-level model but it runs on full Android and is not a Go Edition model. It carries a $110 price tag.

On the other hand, the Galaxy A11 is said to be a more affordable version of the A21. It packs the same 4,000mAh battery with 15W charging support. However, the device defers from the A21 in the rear camera configuration which makes the camera less powerful than the Galaxy A21’s.

ALSO READ:  Foldables To Get Cheaper As Samsung Want Start To Making Its Own Foldable Glass

Instagram Is Testing Dark Mode; How You Can Get it