There has been recently reports suggesting that OPPOÂ hasÂ two mid-range 5G smartphones in the wrap and will soon be unveiled. And now, posters of one of the two phones have appeared online. According to the images, the phone will be called OPPO A92s. 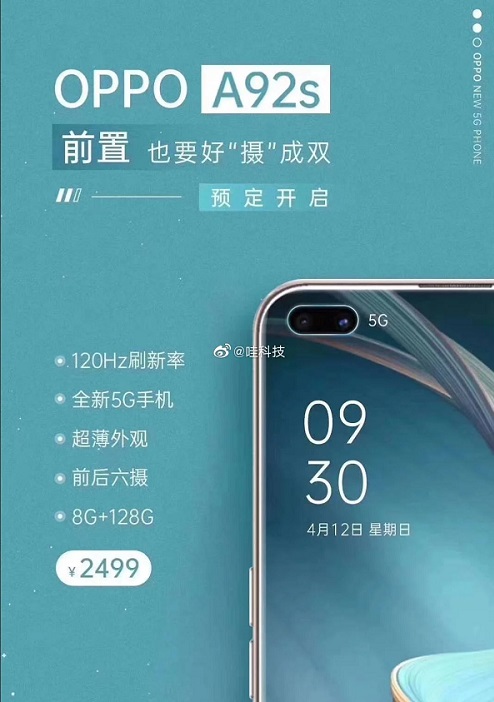 The OPPO A92s will come with a pill-shaped punch-hole at the top left corner for dual selfie cameras. It is also revealed that the phoneâ€™s 6.57-inch LCD display will have a 120Hz refresh rate.

Another of the images gives us a look at the rear design. OPPO has adopted a squircle housing for the four rear cameras but styles it up a bit by placing two of the sensors and the LED flash in a pill-shaped housing within the main one.

Digital Chat StationÂ already leaked the camera specs. The primary camera is a 48MP sensor and it comes along with an 8MP ultrawide angle camera and dual 2MP sensors which should be for macro photography and capturing depth details.

The image also reveals the OPPO A92s will come with a side-mounted fingerprint scanner. It will be available in Gradient White and Navy Blue/Black.