The Xiaomi Mi Pro 5G topped the AnTuTuâ€™s best performing flagship smartphones in February. And now, the company has released the new list of top 10 best performing flagship phones for the month of March. It reveals that the OPPO Find X2 Pro now leads the pack with a score of 606,389. The Mi 10 Pro that scored 598,572 has dropped to second position. These phones have 12GB of LPDDR5 RAM. The X2 Pro has 256 of UFS 3.0 storage whereas the Xiaomi phone has 512 GB of native storage. 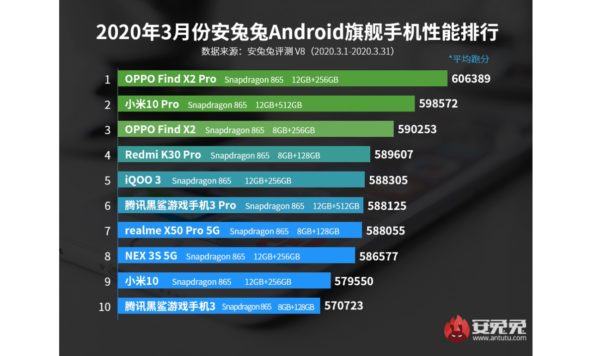 All the devices mentioned in AnTuTuâ€™s March list of best performing flagship phones are powered by the 5G-ready Snapdragon 865 mobile platform and LPDDR5 RAM. Except a few devices like iQOO 3 andÂ Vivo NEX 3S 5GÂ in the list, all the other phones are equipped with UFS 3.0 storage.

TheÂ Nubia Red Magic 5GÂ that debuted last month is not mentioned in the list. The reason behind it is that the benchmarking platform came across some abnormalities in its memory test. The device may appear in the next monthâ€™s list. The Kirin 990 5G poweredÂ Huawei P40Â andÂ P40 ProÂ are also expected to make it to the next list.

Advertisement
ALSO READ:  iOS 13 Has A Dangerous Bug That Reveals All Your Passwords