Huawei has unveiled a new flagship chipset called Kirin 985. The chip is yet another 5G processor, bringing the total number of 5G SoCs under Huaweiâ€™s belt to three. The other two SoCs are the flagship Kirin 990 5G and the mid-range Kirin 820 5G launched recently.

The new Kirin 985 is a flagship processor but not as powerful as the Kirin 990 5G SoC. It is manufactured using TSMCâ€™s 7nm process and integrates a single-chip 5G baseband solution without a plug-in. It supports 2G / 3G / 4G / 5G network standards and NSA / SA 5G dual-modes. The theoretical maximum downlink rate is 1277Mbps and the uplink rate is 173Mbps. In comparison with the Snapdragon 865 processor integrated with Snapdragon X55 modem, the downlink rate is said to be about 40% faster while the uplink rate is about 75% faster.

In addition, the Kirn 985 processor has high energy efficiency. Huawei claim that the power consumption under 5G heavy load and light load scenarios is only 504mA and 291mA respectively. Also, the Chinese company claims that the energy efficiency ratio is about 1.5 times that of the Snapdragon X55-integrated Snapdragon 865 chipset.

In terms of the architecture, the Kirin 985 integrates an Octa-core CPU, which is made up of a single large core, three medium cores, and four small cores. Although, the company didnâ€™t announce details of the cores, the AI benchmark listing has shown that the Kirin 985Â features a single Cortex-A76 core clocked at 2.58GHz and three Cortex-A76 cores with clocking frequencies of 2.4GHz each. There are also four Cortex-A55 cores with lower clock frequency of 1.84GHz. It also integrates an octa-core Mali-G77 GPU as well as a dual-core NPU AI unit and ISP 5.0 image unit, similar to what is found on the Kirin 990. 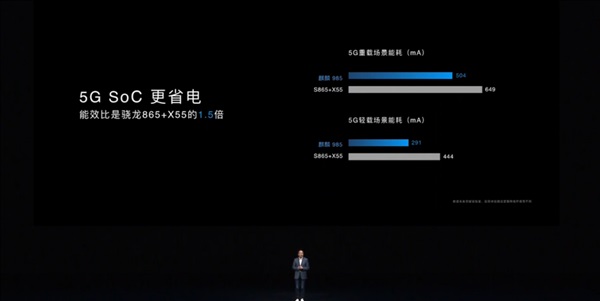 TheÂ Honor 30 Standard Edition which has just been announced happens to be the first smartphone powered by the Kirin 990 processor. The higher Honor 30 Pro and 30 Pro+ both utilise a Kirin 990 SoC. Huawei is also said to use the chipset on the Nova 7.