In its efforts to combat misinformation surrounding the novel Coronavirus (COVID-19) Pandemic, Facebook is rolling out a number of features and initiatives to curb the spread of disinformation including pinning government public health warnings to the top of people’s news feeds.

In March, the social networking giant issued warnings relating to about 40 million posts deemed false by Facebook’s fact-checking partners, according to the company’s vice president of integrity Guy Rosen, adding that users who saw those warning labels rarely clicked through to the original content. Facebook has removed hundreds of thousands of posts with misinformation that “could lead to imminent physical harm,” Rosen added.

With that done, Facebook is now adding anti-misinformation messages in the news feeds of users who recently engaged with fake coronavirus news by liking, reacting or commented to that post that Facebook later removed.

There will now be a box that encourages them to visit the World Health Organization website.

Another feature Facebook is launching is a “Get the Facts” section full of verified news about the pandemic. 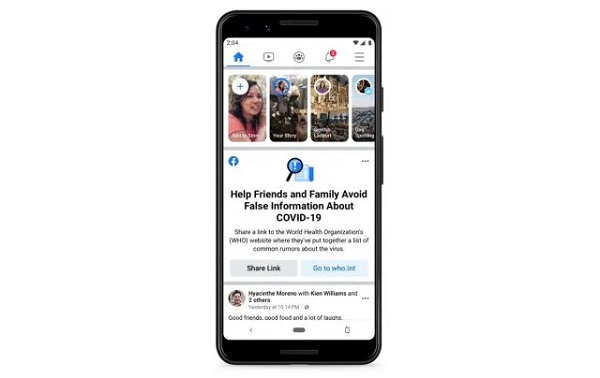 “Through this crisis, one of my top priorities is making sure that you see accurate and authoritative information across all of our apps,” said Mark Zuckerberg.

“Facebook, given its scale, is the epicenter for misinformation,” Fadi Quran, Avaaz’s campaign director, told POLITICO, adding the company’s efforts to combat the problem had steadily improved since the social network announced it would do all it could to stop the spread of such life-threatening falsehoods.