Following the release its much awaited dark mode to all users of the application, WhatsApp continues its endless process of improvement bringing back into vogue a feature already available for years in the competing apps: the automatic deletion of messages.

In the beta versions 2.20.83 and 2.20.84 of WhatsApp, the possibility of setting a countdown for the automatic deletion of messages in traditional conversations has resurfaced. Already glimpsed in the past, it appeared more recently that the company had decided to reserve this function only for group chats, while now that seems to have changed again. 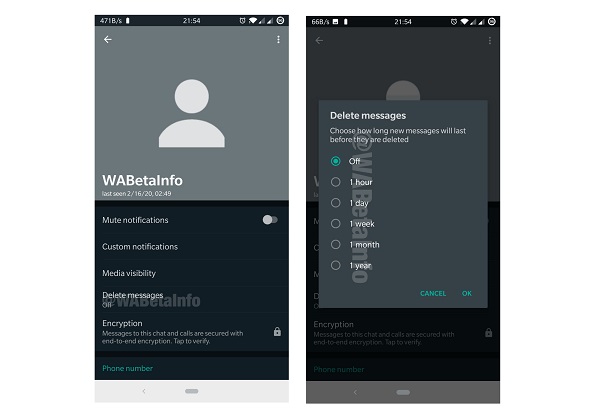 As seen in the pictures above, in the menu dedicated to two-party conversations, the item relating to the self-destruction of messages has reappeared, with timers that can be set from a minimum to 1 hour to a maximum of 1 year. Once the function is activated, a clock icon will appear next to the sending time, in order to underline that the message will be destined for self-destruction, after the pre-set period of time has elapsed.

At the moment it is unclear if and when this feature will be made available for all WhatsApp users, but what is for sure is that the development team is seriously working on it. Would it be convenient for you, or would you give priority to some other function still missing?

Oppo A15s Gets A Higher-Storage Version