Showmax, Multichoiceâ€™s video-on-demand service has received a very important feature that pretty useful to almost all its users at this critical time of Coronavirus (Covid-19) pandemic. This move by the company is majorly to keep its users updated on spread of the virus across the globe.

The live news streaming added on the platform are from major news companies and they are: 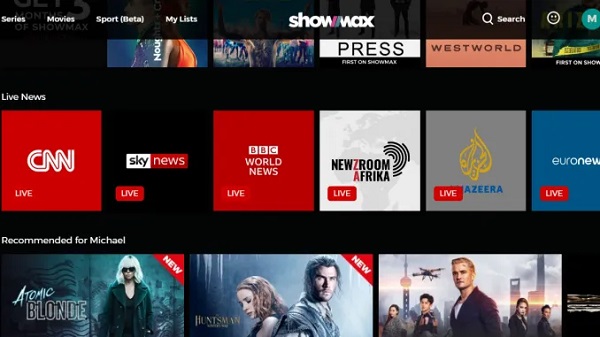 This is available on Showmax on the web (Chrome, Firefox, Safari or Edge), Samsung smart TVs from 2017 or later, LG smart TVs from 204 and later, Android 4.4.0 or higher smartphones and Android TVs. According to Showmax, Apple TV and iOS devices will soon support the service.

One of the major reasons why people keep up with traditional TV is to watch the news, either from local news outlets or international ones. DStv, Showmaxâ€™s sibling, has both local channels that broadcast the news as well as the international news and now Showmax has been given the same treatment.

Showmax has been steadily adding value to their subscription for a while it started off by offering the usual TV shows and movies like every other subscription models. The company moved on to streaming shows as they come out, like the new season of WestworldÂ which is pretty cool. Last year, it started offering live sports streaming, which was major since a lot of people out there pay money to catch up with their favorite sporting events.

iPhone 12 Pre-orders To Go Live Simultaneously Around The world