Since 2019, Foldable smartphones have been a trend. Though, Samsung can get creditÂ for making the innovative step, it was actually Royole that was the first toÂ launch a foldable smartphone. And now, the company has just launched the Flexpai 2, the successor to the first smartphone with a flexible display.

Royole Flexpai 2 comes with the 3rd generation Cicada wing, which is basically a fancier term for the companyâ€™s flexible display panel. The latest iteration features various improvements over its predecessor and now has a smaller crease and bend radius. This also allows for an increase in brightness, contrast and offers a better viewing angle. 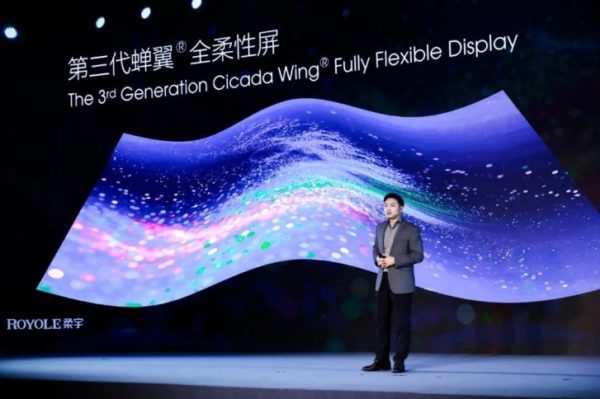 Under the hood, Royole Flexpai 2 houses Qualcommâ€™s Snapdragon 865 SoC alongside the X55 5G modem. Its display is a 7.8 inch screen with a 4:3 ration when fully opened. It also features the latest LPDDR5 RAM and UFS 3.0 storage as well. Unfortunately, details regarding its battery capacity are still unknown, but that is to be expected since there is still time for the device officially launches.

In the conference, Royole officials showcased the display, which was the highlighting part of the event. The improvements in technology was boasted, rightly so, and the panel has reportedly withstood 200,000+ bends without sustaining any damage. This new flexible panel features nearly 100 micro nanomaterials that improve the strain recovery and â€œlayer peeling.â€ In other words, there are less chances of creases and bubbles forming when the device is unfolded.

According to Royole, the Flexpai 2â€™s new Cicada Wing will feature 1.3x better color gamut and 500x the contrast, thanks to its high quality LCD panel. The handset will also feature a unique custom designed display driver that is integrated in the circuit chip. On the other hand, the display panel can be folded in multiple directions and even rolled on its own, showcasing the advancements in the flexible display field.

Royole Flexpai 2 was showcased in an event in China by CEO Bill Liu, who also announced the companyâ€™s partnership with another electronics brand, ZTE. This may be indicative of ZTE using Flexpaiâ€™s technology, integrating the display in its own foldable smartphone series. However, that is just speculation. Thus, take it with a grain of salt. The Flexpai 2 is expected to launch in Q2 of 2020, so stay tuned.

Google One Gets Automatic Phone Backups feature for Android

Xiaomi Mi A3 Finally Gets A Safe Android 11 Update