In-display fingerprint scanners have been around for a while their accuracy and mass adoption is also come a long way. However, thereâ€™s a serious limitation in terms of implementation as they only work with OLED display panels. Well, Redmi General Manager Lu Weibing has just officially announced today that LCD in-display fingerprint readers are now clear for mass production, thanks to research efforts by Redmi.

The General Manager also shared a very short video of the fingerprint reader in action on an unknown phone (which could be just a prototype).Â  He explained the underlying issue that has been keeping the technology from being mass-produced and how the R&D team at Redmi overcame it.

According to his explanation, Redmi implemented a high-transmittance film that ensures infrared light passage through the display (which was not possible earlier) above the sensor. This allows the fingerprint to be registered and hence the implementation to be successful.

Redmi is yet to go into the intricate details of the new technology which leaves the question about its accuracy, future implementation, its exact costs unanswered. However, we believe a Redmi smartphone with the same LCD display could very well be possible late this year itself. If we were to guess, a Redmi 9A or Redmi 9 fits the bill here perfectly. Thatâ€™s when weâ€™ll be able to know how fast these sensors work. Since this is a first-gen product, we donâ€™t expect blazing fast speeds yet. 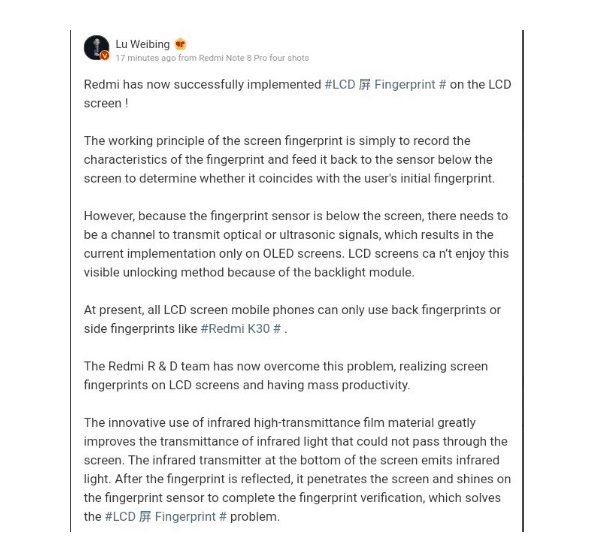 In-display fingerprint readers have even made it to mainstream flagships last year becoming successful and accepted by many users. The LCD implementation will, of course, drive the same feature to even more phones by the end of this year. There are other firms such as BOE and AUO Optronics that also have been workingÂ on the same technology but it seems Redmi has beaten all of them to market with a mass-production ready solution announced today.