A few months ago, HuaweiÂ announced its next-generation Mate 30 series flagship smartphones in China, which makes them the first set of devices from the Chinese company to launch without support for Google apps and services due to the ban on the Chinese giant from the United States.

However, there was a workaround available which enabled users to install Google apps and services on the Mate 30 series phones. However, after a report raised concerns related to the security issues surrounding LZ Play app workaround, it was shut down.

However, a new workaround has appeared online, which seems to be an easy way to install Google apps and services on Huawei as well as Honor-branded smartphones. For this, the user needs to download Chat Partner app which is around 147MB in size. 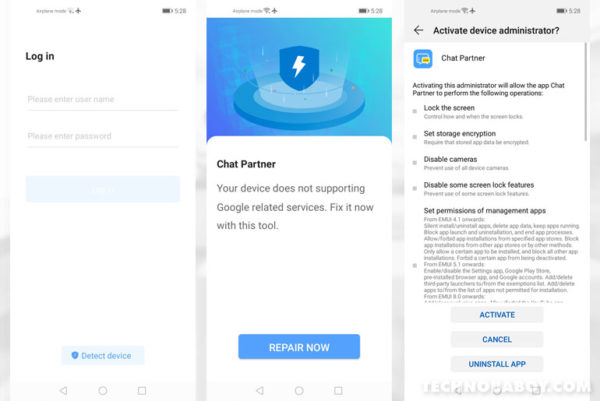 Once installing and running the application, the user needs to tap on â€œDetect Deviceâ€Â option and then on â€œRepair Nowâ€Â and finally tap on â€œActivateâ€Â after the Device Administrator window pops up on the screen.

After this process, restarting the smartphone should get theÂ GoogleÂ Play Store ready and working on the smartphone. Once this is done, the user can remove the Chat Partner application installed.

Do note that this is still an unofficial way to get the Google services and applications running on Huawei smartphones which come without such service. It is not yet clear how long the method will continue to work.

GoogleÂ recently warned Huawei usersÂ not to side-load its applications. It the blog post, the company wrote:

â€œsideloaded Google apps will not work reliably because we do not allow these services to run on uncertified devices where security may be compromised. Sideloading Googleâ€™s apps also carries a high risk of installing an app that has been altered or tampered with in ways that can compromise user security.â€

Meanwhile, Huawei has launched Huawei Mobile Services akaÂ HMSÂ which is being seen as an alternative to Google Mobile Services (GMS) in order to reduce its reliance on Google. The company is also planning to invest billions of dollars to boost its app ecosystem.

ALSO READ:  25 Important Windows Keyboard Shortcuts You Might Not Know

How To Identify Fake Tecno Smartphone