Due to the outbreak of the novel coronavirus, physical event was not possible, but Apple still unveiled its new iPad Pro 2020 series. The announcement of tablets includes two version: the 11-inch variant and the 12.9-inch model, just like the previous generations.

Though, Apple is presently the leader of the tablet market, can we really say that the iPad Pro 2020 is the best option? For us to establish that, here is a comparison review between the Apple’s slate and the best Chinese flagship tablet till date: the MatePad ProÂ by Huawei which also comes in a 5G variant.

The iPad Pro 2020 we are going to use in this comparison is the 11-inch model since it is the most similar to Huawei MatePad Pro in terms of price and features. 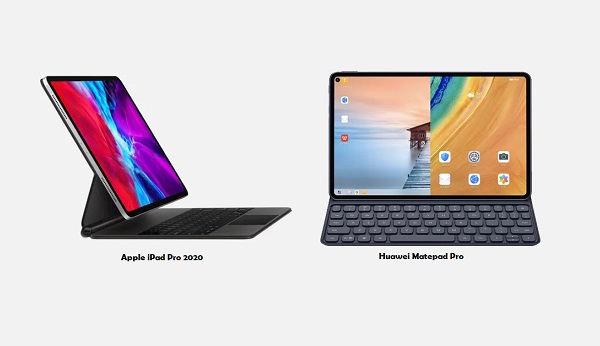 Apple iPad Pro 2020 and Huawei MatePad Pro comes with great designs. They both boasts of a very high screen-to-body ratio as well as an aluminum body.

Huawei MatePad Pro looks more impressive due to its higher screen-to-body ratio. Both the tablets support a keyboard and a stylus. However, because of an integrated trackpad, the support for some macOS gestures, backlit keys, and more, the new Magic Keyboard of the iPad Pro 2020 looks superior.

According to specs on the paper, we believe that the iPad Pro 2020 is a slightly superior display to Huawei MatePad Pro. Not by a high margin, though. These displays come with a high 2K resolution, a wide color gamut, and a stunning image quality. However, they are not OLED display but classic IPS panels.

However, as what you just read suggests, this does not mean they are not amazing displays.

The iPad Pro 2020 comes in WiFi and 4G versions: the 4G one supports the eSIM technology besides a standard nanoSIM. Note that if you get the Huawei MatePad Pro in its global version, you wonâ€™t get Google services out of the box, despite the tablet runs Android 10.

Apple iPad Pro 2020 is the obvious winner in terms of camera comparison, there’s no doubt about it even though we are only assuming it after looking at the specs sheet. It boasts a triple camera setup composed of a 12 MP main sensor, a 10 MP ultrawide lens and a TOF 3D LiDAR scanner which can provide very accurate depth info thanks to a laser mechanism. You can get more info about how the LiDAR scanner works HERE (our official launch article about the new Apple slates).

The Apple iPad Pro 2020 even supports 3D facial recognition thanks to Face ID. On the rear side, Huawei MatePad Pro has just a single 13 MP sensor and it is a camera commonly used on affordable smartphones. The iPad even offers a better front camera which can record videos in 1080p at 60 fps.

According to Apple, the iPad Pro 2020 provides 10 hours of battery life on a single charge, if you use it on WiFi and without 4G connectivity. Huawei MatePad Proâ€™s battery has a 7250 mAh capacity and it supports a 40W fast charging tech: one of the fastest charging technologies ever seen on a tablet. Unlike the iPad Pro, it even supports wireless charging and reverse wireless charging.

The iPad Pro supports reverse charging via cable, but you can not charge it wirelessly.

Apple iPad Pro will have a starting price of â‚¬899/$799 in the global market (the price refers to the WiFi-only version), while Huawei MatePad Pro will be sold for â‚¬549.90 in its WiFi variant.

Though the MatePad Pro has a way higher value for money, the iPad Pro 2020 wins the comparison when it comes to specs and features, despite it does not come in any 5G variant.

WeChat For Android To Get Dark Mode Feature