The Chinese phenomenon TikTok keeps making waves as days goes by. After pushing Facebook aside to slide behind WhatsApp as the most-downloaded app last year. This year, however, the short-video platform went even further leaving Mark Zuckerbergâ€™s messaging platform behind.

According to recent data from shared by Sensor Tower, Douyin and TikTok were downloaded 104 million times on the GoogleÂ Play Store and Apple app store.

The report said that, TikTok surpassed WhatsApp as the worldâ€™s most downloaded mobile app in the month under reference. The figure represents a massive 46% increase over the same period last year. It also shows a 27% increase when compared to the total downloads in December 2019. The stat reveals the top three markets for TikTok downloads during this period are India, Brazil and the United States. Thus, the figure could even be higher as it doesnâ€™t include downloads in third-party Android platforms in China and other regions.

As of now, TikTok downloads has exceeded 1.82 billion times. From a trend perspective, the download volume in February will reach a new high, and the demographic dividend of overseas emerging markets will support TikTok. As a result, the platform will keep experiencing consecutive growth every month. 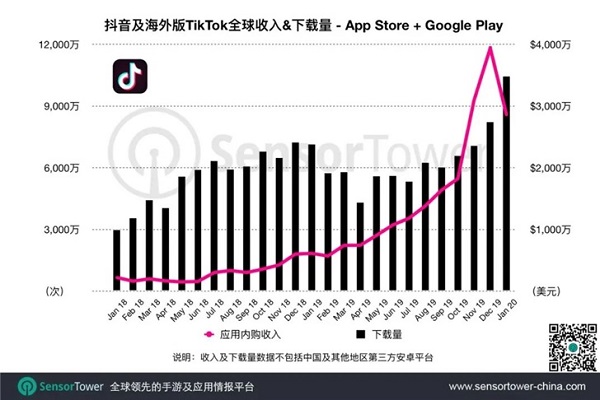 When it comes to the financial part, Douyin and TikTokâ€™s global revenue in December soared to $39.4 million but feel to $28.6 million in January. Still, the revenue ranks as the third-highest revenue-generating month after December and November 2019. The in-app purchase revenue comes mainly from China and the United States, accounting for 84.5% and 10.1% of total revenue in January, respectively.

OnePlus To Launch HydrogenOS 11 On August 10

How To Easily Contact WhatsApp Support Team and Fix Any Issues