Huawei MatePad Pro was unveiled in late November and now the company has released the 5G version of the tablet. This model is powered by the Kirin 990 5G chipset and also come with faster wireless charging.

The Kirin 990 5G is built on a more advanced 7nm+ EUV process (compared to 7nm for the regular Kirin 990). This allows it to run six of its eight CPU cores at a higher clock speed and the NPU was beefed up.

More importantly, this chipset has an integrated 5G modem. It promises 10x the downlink speeds of 4G and low latency, perfect for cloud-based gaming.

Huawei is quite proud of the custom multitasking interface it has developed (the tablet runs EMUI 10 based on Android 10). It supports split-screen with two apps running side by side. This “App Multiplier” feature is supported by 3,000+ apps, the plan is for all top apps to support the feature thanks to the Open UIKit for developers (reading between the lines, this is “we can live without you, Google”). 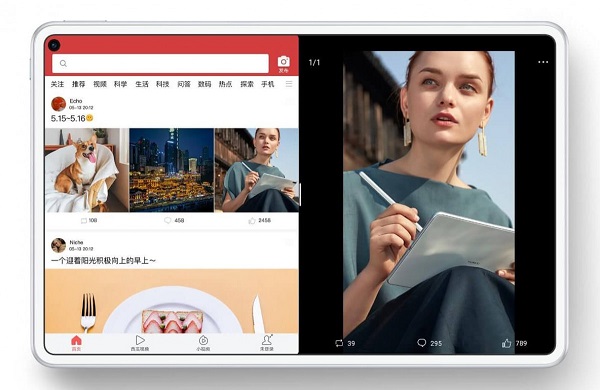 There are two key accessories – the keyboard and the stylus. The Smart Keyboard features long key travel (1.3mm) and can hold the tab at two angles (60° and 70°). The M-Pencil stylus can differentiate between over 4,000 levels of pressure and is even sensitive to tilt angle.

The tablet boasts quad speakers (two on the left, two on the right). For voice and video calls as well as using digital assistants, the tablet sports four far field mics. There’s also an additional noise canceling mic next to the 13MP camera. On the front is an 8MP selfie camera inside a punch hole.

There’s a special Vegan Leather Edition of the MatePad Pro. It’s slightly thicker and heavier – 7.99mm and 492g, up from 7.2mm and 460g of the vanilla model. It’s available in Orange and Green. The regular slate with a fiber glass back comes in White and Gray (which looks blue to us).

The Huawei MatePad Pro with Wi-Fi only and LTE connectivity is expected to be available in Europe starting in April, prices are below. Also check out the prices of the 5G model.

If you’re interested in the accessories, the Smart Keyboard is €130, the M-Pencil €100. There are also two protective covers, the Folio Cover and MatePad Sleeve (both €40).