Well, it has been coming since but we only try to look away from it and now it has happened. No phone branded Blackberry was announced or released all through 2019. Obviously, the writing on the wall was already visible. And now, there’s finally an official statement to confirm our thought. In a statement made public today, it is now official that TCL will no longer manufacture and sell new BlackBerry-branded smartphones.

The partnership between BlackBerry Ltd and TCL could only last for jmust 3 years, however, with a handful of BlackBerry phones, including BlackBerry KEYone, Motion, KEY2 and KEY2 LE, released. The official statement from BlackBerry/TCL reads: 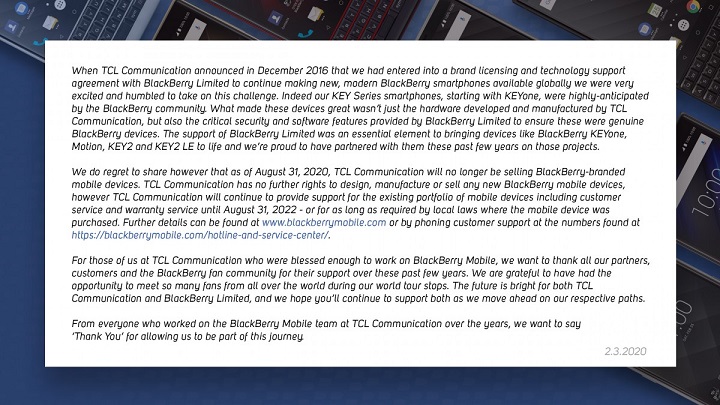 When TCL Communication announced in December 2016 that we had entered into a brand licensing and technology support agreement with BlackBerry Limited to continue making new, modern BlackBerry smartphones available globally we were very excited and humbled to take on this challenge. Indeed our KEY Series smartphones, starting with KEYone, were highly-anticipated by the BlackBerry community. What made these devices great wasnâ€™t just the hardware developed and manufactured by TCL Communication, but also the critical security and software features provided by BlackBerry Limited to ensure these were genuine BlackBerry devices. The support of BlackBerry Limited was an essential element to bringing devices like BlackBerry KEYone, Motion, KEY2 and KEY2 LE to life and weâ€™re proud to have partnered with them these past few years on those projects.

For those of us at TCL Communication who were blessed enough to work on BlackBerry Mobile, we want to thank all our partners, customers and the BlackBerry fan community for their support over these past few years. We are grateful to have had the opportunity to meet so many fans from all over the world during our world tour stops. The future is bright for both TCL Communication and BlackBerry Limited, and we hope youâ€™ll continue to support both as we move ahead on our respective paths.

From everyone who worked on the BlackBerry Mobile team at TCL Communication over the years, we want to say â€˜Thank Youâ€™ for allowing us to be part of this journey.

BlackBerry has struggled to gain a firm footing since it switched from its pioneer proprietary operating system, BlackBerry OS to BlackBerry 10 and then to Android OS.

One of the reason why the brand has struggled in recent times is the relatively steep prices that BlackBerry-branded phones commanded in the market when compared to the competition. While it offers better security features than the average Android phone, that was not enough to convince buyers to pay the premium prices.

As has been expressed before, smartphone consumers have voted against secure smartphones, among other classes of phones that do not sell much. Is this the final end of BlackBerry phones or will BlackBerry Ltd try again to gain a footing in a market that it once ruled?

Meanwhile, as TCL discontinues BlackBerry phones, it hasÂ announced the first of its own branded smartphones.