As usual, the Chinese benchmark outfit AnTuTu has released the popular ranking of the top 10 flagship and  and mid-rangers smartphones for the month of January 2020. The ranking is based on data collected between January 1 and January 31, 2020. Also, it is based on the average score of over 1000 and not just the highest score. 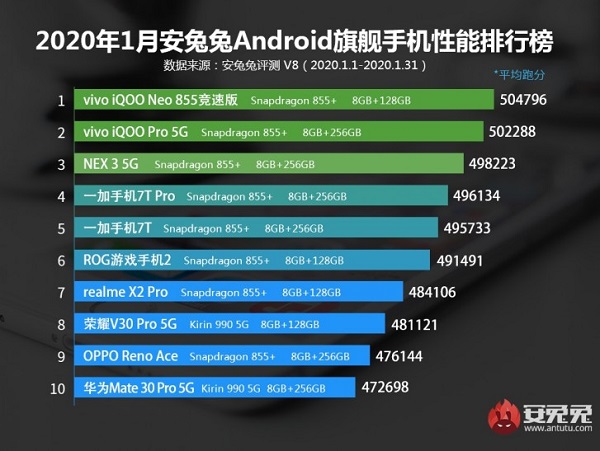 The list, as usual, is dominated by models running Qualcomm’s chipset and this time around eight out of the top 10 models are powered by the Snapdragon 855+ chipset. At the top of the list is the Vivo iQOO Neo with an average score of 504796 points. It is closely followed by the Vivo iQOO Pro 5G with a score of 502,288. The Vivo NEX 3 5G comes in at the third spot with an average score of 498223 points.

The OnePlus 7T Pro and OnePlus 7T occupy the 4th and 5th spots respectively with an average score of 496123 points and 495733 points. The two models are equally powered by a Snapdragon 855+ chipset. 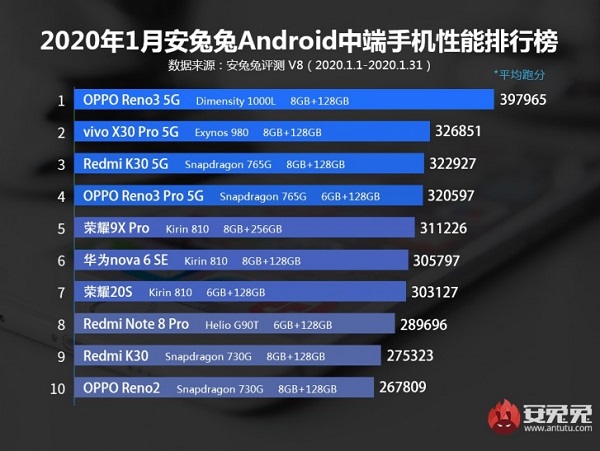 The benchmark site also reminds that this is a raw comparison of performance results and cannot be responsible for comparison in the camera department, design, battery capacity or fast-charging abilities.

ALSO READ:  Vin Diesel Stunt: Over half a million iPhones stolen from a moving truck

The basic Oppo Reno3 was launched on December 31, so this is its first month where it could have been benchmarked on AnTuTu. Mediatek uses Cortex A77 cores and Mali-G77 GPU, which seems like a properly powerful combo.

Plenty of manufacturers are expected to introduce a smartphone with Snapdragon 865, so the February Top 10 list from AnTuTu should have a bunch of new faces in the top spots.

Facebook is Secretly Building a Meme Hub to Connect