Xiaomi has filed two new and fairly peculiar smartphone concepts in China. These two patents feature designs that are familiar to what we’ve seen from other companies before, but they’re also slightly different in their own way. These two concepts revolve around the idea of displays that only wrap around the device just like the Mi MIX Alpha, instead of folding like the Galaxy Fold and Mate X. 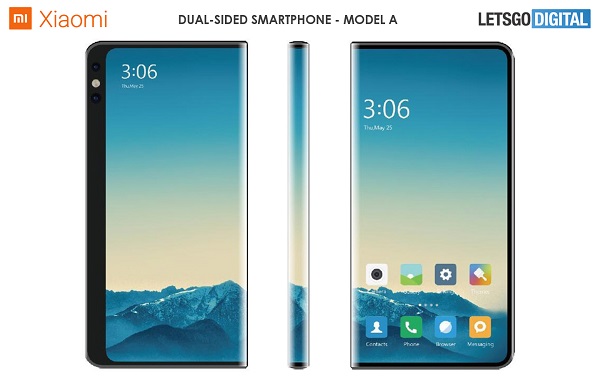 Looking at the first design, the phone reminds us of the Huawei Mate X, and it’s the more practical of the two patented devices. The display wraps around the side of the device, leaving it sized like a normal sized device. Unlike the Huawei Mate X however, the device doesn’t unfold, allowing the device to be more contained.

The camera strip on the patent is much more subtle when compared to the Mate X’s. We actually saw earlier patents for this device recently, so it’s good to see that it’s making rounds.

The second patented device on the other hand is VASTLY more bizarre than the previous device. Instead of forming a wider display, this device features a much longer display that folds over the top of the device. There’s also a small chin at the bottom probably for the sensors, and what appears to be a triple camera setup integrated into display, like some super huge hole punch selfie camera.

It seems a bit more unconventional than the previous device, but if Xiaomi can find a reasonable way to make it more interesting than we’re all for it. While it’s fully possible neither one of these devices will ever fully materialize, it’s certainly interesting to discuss and imagine what they’d be like if they were real.

It’s also quite nice to see that Xiaomi are taking a different direction from other companies.

Adobe AI Can Differentiate Between Photoshopped Images And RealOnes