Foldable phones are now around us after months of imaginations, but those are so yesterday. Xiaomi thinks it has something better than just folding phones. The Chinese company has introduced the Mi Mix Alpha, a surround-screen “concept” phone with a display that is only interrupted by a camera seam on the back of the device, which sports a 108MP sensor. 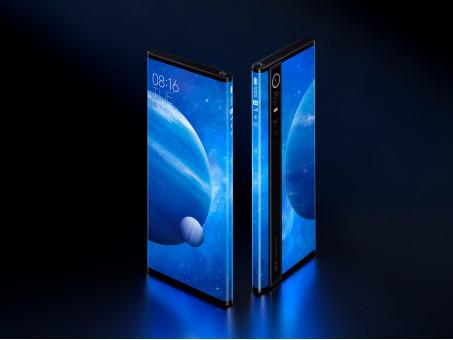 While the practical use of a surround screen seems highly doubtful, the concept does look stunning in the marketing renders. The display curves all around the sides of the phone and continues on the back seamlessly, prompting Xiaomi to tout a screen-to-body ratio of 180.6%, which is not how math works. There is no word on which material is used to protect the delicate panel; the company only talks about “layers” of protection, careful not to say whether it’s glass or plastic.

Similarly, Xiaomi mentions neither display resolution nor technology, though it’s safe to assume it’s using flexible OLEDs to achieve the curvature. The parts of the device that aren’t screen are comprised of high-quality materials like titanium alloy and ceramics, while the camera bump/seam is protected by sapphire.

Due to the wrap-around screen, the device doesn’t have physical buttons on the sides. It emulates them by relying on haptic feedback and pressure sensitivity, while a round power button seems to sit on the top left of the phone. The small bezel doesn’t allow for a traditional earpiece, either, so the company opted for “display acoustic technology” which replaces both a speaker and a proximity sensor.

Advertisement
ALSO READ:  Here Is The List Of The First Set Of Devices To Get Android 11 Update

As far as the camera department is concerned, the Mix Alpha boasts of a whopping 108MP lens with a 1/1.33-inch large sensor, capable of combining four pixels into one for better low-light performance. Four-axis OIS, ISOCELL Plus, and smart ISO round out the package. Two more lenses join the primary shooter: a 20MP wide-angle camera allowing for macro photography and a 12MP telephoto capable of 2x optical zoom.

There’s no camera on the front; you’re going to have to flip the phone around to take a selfie.

The device is powered by Snapdragon 855+, paired with 12GB of RAM and 512GB of UFS3.0 storage, along with a 5G modem fine-tuned for the Chinese market.

The 4,050mAh battery can be charged at up to 40W – obviously, there’s no wireless charging here.

We still trying to gather what clear advantages the Alpha’s surround-screen has over conventional ones – after all, your eyes cannot make use of both sides of the phone at the same time. Xiaomi sees the display on the back as a secondary panel, auxiliary to the primary one. For example, you can flip over the phone to activate this part of the screen and interact with a collection of widgets, informing you on the weather, your fitness status, and allowing you to start recording a video. I’d be surprised if that doesn’t lead to a couple of accidentally opened apps and sent messages, though. You also probably won’t be able to put the phone in a case, and any drop might be the Alpha’s last – there’s a high chance it will fall right on the unprotected display.

ALSO READ:  WhatsApp Is Working On Chat History Migration Between Android And iOS

Despite calling this a concept phone, Xiaomi plans making it commercial, starting a small-scale production in December, few months away. It’s not clear whether the device will be available for purchase outside of China — no other plans have been shared. The company has only announced the Yuan price of RMB 20,000, which roughly converts to $2,800.

So, Why The Delay?

Xiaomi planned to launch the Mi Mix Alpha in December last year, but that hasn’t work out. The Chinese company told Abacus News that it currently doesn’t have a date for a release, but that it would share one as soon as it could. It looks like flexible screens are still extremely prone to errors, as already proved by the delayed releases of the Mate X and the Samsung Galaxy Fold.