With the introduction of Snapdragon 662 chipset, Qualcomm primarily focused on camera and AI improvements. This means you can expect an average of $150 smartphone to handle a lot more tasks and capture stunning pictures, thanks to a new ISP. 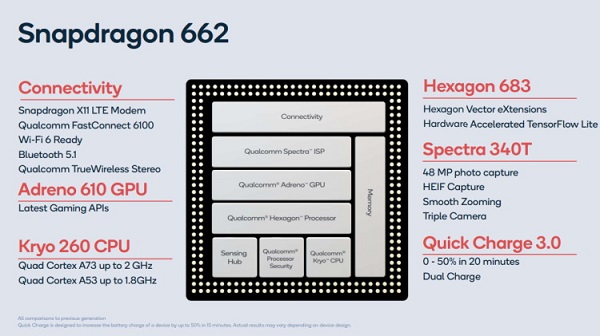 This chipset supports up to triple-camera configurations and 48MP cameras, thanks to the new Qualcomm Spectra 340T ISP. It also enables support for HEIF file format and smooth switching between the lenses. The chipmaker says this is a first in a 6-series chipset. The Snapdragon 662 also supports Quick Charge 3.0.

On the connectivity front, Snapdragon 662 features the new Snapdragon X11 LTE modem that supports 2-carrier aggregation, 2Ã—2 MIMO, and 256-QAM modulation. This means you will get download speeds up to 390Mbps and upload speeds up to 150Mbps with this new chipset.

Qualcomm has made huge steps in its chipset technology and itâ€™s now trickling it down to its new 4-series chipset. Snapdragon 460 comes with noteworthy improvements in the camera, connectivity, and AI department.

The biggest upgrade in the Snapdragon 460 will have to be the change in architecture. It has now adopted the big.LITTLE architecture (Kryo 240) and includes 4 performance cores (Cortex-A73) for the first time ever. The other 4 cores are backed by the Cortex-A55. This chipset is based on the 11nm architecture.

Snapdragon 460 also includes the Adreno 610 GPU, which is a massive jump over Adreno 506 found in the Snapdragon 450. It will result in 70% performance gains, as per the chipmaker. Thereâ€™s also the Hexagon 683 DSP, which is another first for 4-series chipsets, and supports Hexagon Vector extensions and TensorFlow Lite.

You can see Snapdragon 460 as a slightly underpowered variant of the Snapdragon 662, well, because it features the same architecture, DSP, and the ISP. This chipset includes a Spectra 340 ISP with support for triple-camera modules, 25MP photo capture, and dual 16MP photo-capture. Even your sub-Rs. 8,000 phone will be able to capture some stunning pictures with this chipset in tow. 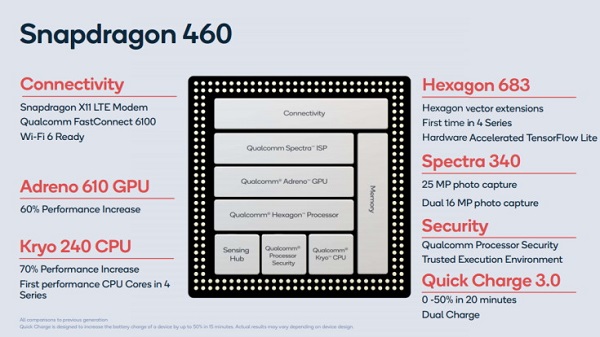 Snapdragon 460 chipset also includes the Snapdragon X11 LTE modem that provides you download speeds up to 390 Mbps and uploads up to 150 Mbps.

In its official press release, Qualcomm says that we can expect smartphones powered by Snapdragon 460 and Snapdragon 662 to arrive in the market by the end of 2020. Though that sounds late, we expect Realme or Xiaomi to dive into the opportunity and announce new budget phones with these chipsets in tow.

Checkout the first passenger drone on its maiden public flight

Cyber Attacks Against WHO increases Fivefold, Urges Public To Be Vigilance