At the just-concluded 2020 edition of CES, Samsung showed off a number of products to a select number of products which includes its upcoming second foldable phone with a clamshell design. According to leaked photo from the event during a secret meeting, the phone which was originally referred to as the Galaxy Fold 2, was reportedly named as “Galaxy Bloom”. Now, another leak is out, revealing that is not the official name of the phone but its codename.

The popular leak-star Ice Universe (@UniverseIce) took to Twitter a few hours ago and posted a tweet saying “namBloom is just a zcode e…” and claiming that “the original name is Galaxy Z ****”. A few hours later, probably unable to contain his excitement, he shared a photo showing the official name of the device. 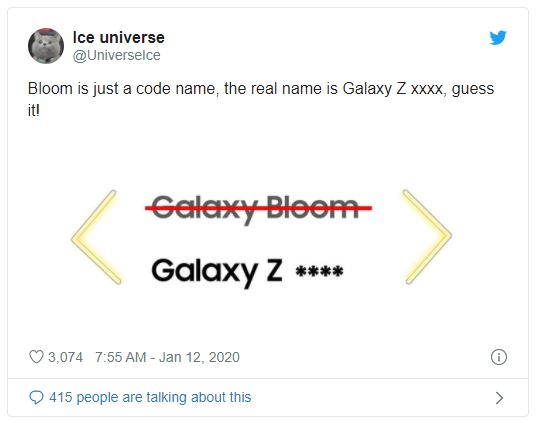 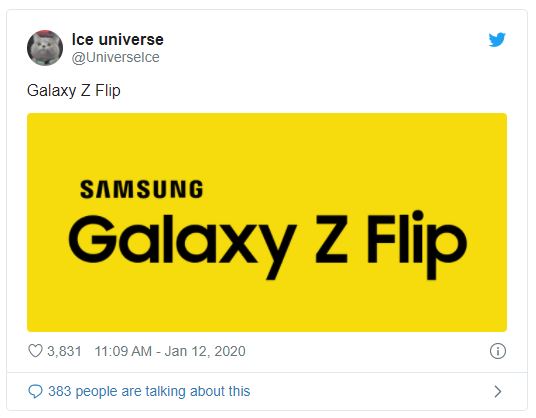 The Samsung Galaxy Z Flip will have a fold across its horizontal axis, unlike the Galaxy Fold that folds across its vertical axis.

It has been reported that the device will come with a Snapdragon 855 processor under the hood rather than the new and more powerful Snapdragon 865. It will also feature a new type of glass covering the display called Ultra Thin Glass which replaces the polymer film used for the Galaxy Fold.

Other features of the Galaxy Z Flip include support for 8K video recording, dual cameras, and an Infinity-O display with a centered punch-hole for the selfie camera. It should also run Android 10 based on OneUI out of the box.

Samsung will announce the Galaxy Z Flip alongside the Galaxy S20 series at an event scheduled for February 11.