New leaked renders of the Huawei P40 series devices show us what the phone may look like. The images reveal a triple camera at the back. 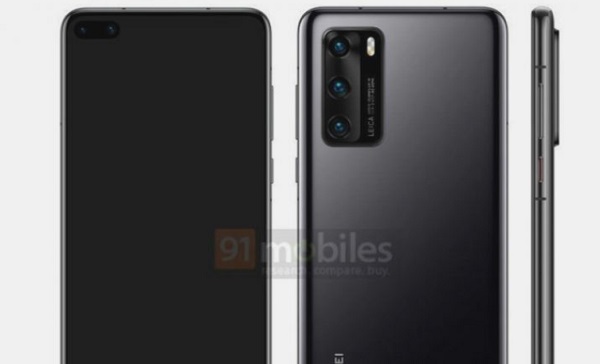 The leaked images posted online showed the standard Huawei P40 model, with a triple-lens rear camera having Leica optics, and a pair of front cameras for selfies. It is highly likely that the rear camera is a high-resolution camera with an ultra-wide angle snapper. Despite the fact that there are no confirmed reports regarding the exact camera resolution, we are certain that fans are eagerly looking forward to it.

Speculations from certain quarters suggest that the P40 Pro variant may offer a periscope camera with a 10× optical zoom.

The leaked images also revealed the device sporting a USB Type-C port but the 3.5mm headphone jack that was present in the Huawei P30 series was nowhere to be seen. The P40 Pro is rumoured to come with a curved display having Quad HD+ resolution and a penta-lens camera configuration at the rear.

There are also rumours from certain quarters that the Huawei P40 Pro could boast a massive battery size around 5,500mAh that supports fast charging and also supports 5G connectivity.

Another render shows off the five color options that potential buyers will be able to choose from when Huawei unveils the P40 Pro in March. They are (from left to right): Black, Blush Gold, Silver Frost, Deep Sea Blue and Ice White (with pearlescent finish).

The Huawei P40 will come in the same colors as the Pro model, here’s how they look (note the absence of the fourth module that’s on the same level as the LED flash).

The new range of devices, the P40 and the P40 Pro are expected to be powered by HiSilicon’s Kirin 990 5G chipset and will be officially unveiled at an event in Paris in March. On the software front, the new phones will come with the Android 10 OS and would offer no Google Mobile Services.