The coming of a budget-friendly smartphone from Apple this year is no longer news and the affordable iPhone called iPhone 9 as matter of fact is expected in just few weeks from now. In fact, the Cupertino based company will begin assembling the device in February and might go official in the month of March.

Well, some leaked renders about the upcoming affordable device have been surfacing and now we have another one. The leaked renders reveal the design of the phone along with the possible color variants. 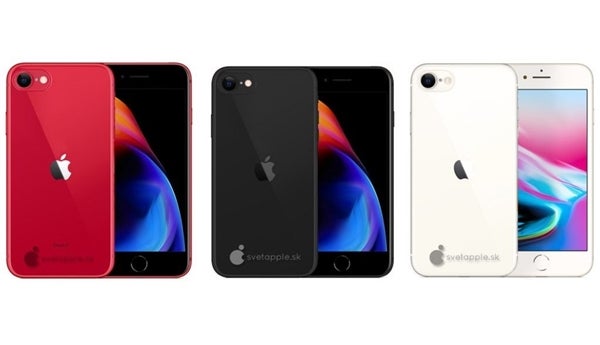 The leaked render images revealed three different color variant namely Red, Black, and White. Even though the iPhone 9 looks like the iPhone 8 device, there is no information on the signature gold color option.

This is the first time weâ€™re seeing the red color option on the iPhone 9. For those whoâ€™re unaware, AppleÂ introduced the red color iPhones with its then-popular iPhone 7 smartphone. Coming to the design, you can see a single camera sensor at the back accompanied by an LED flash. There is an Apple logo branding in the middle.

On the front, you will see a small 4.7-inch display with thick traditional bezels and chin. Furthermore, you can see the physical TouchID button on the bottom that can be used to unlock the device. As mentioned numerous times, the iPhone 9 will resemble the iPhone 8 in more than one way and this render proofs the design aspect of the statement.

Coming to the specs, Apple iPhone 9 aka iPhone SE2 will come with an improved A13 Bionic chipset paired with 3GB RAM and 64GB onboard memory. And that being said, the new improved chipset will allow the device to continue getting iOS updates for a good amount of years.

The device is said to come with a starting price tag of $399.

Lastly, Apple is known for holding press conferences in the month of March meaning we might see the device getting official there.