The 5G smartphone market is in its early stages, but that is being is controlled by just two big dogs, Huawei and Samsun. The Chinese manufacturer holds around 37% of the market share while the Korean Samsung coming in at a close second with 36% of the market share. This is what emerges from the recent Strategy Analytics reportÂ on the trend of deliveries of smartphones compatible with the new generation networks.

Ken Hyers, Director at Strategy Analytics said that the global demand for 5G smartphones grew rapidly in 2019, slightly overwhelming phone manufacturers. With regions like China and South Korea leading the pack, it is expected that regions like Europe and the US will close the gap later this year.

Ville-Petteri Ukonaho, Associate Director at Strategy Analytics stated that Huawei had the highest shipment in 2019 for 5G phones, with a shipping of around 6.9 million phones. This is in spite of the sanctions imposed on it by the US. The majority of Huaweiâ€™s 5G devices were shipped in China, where the sanctions were relatively ineffective. 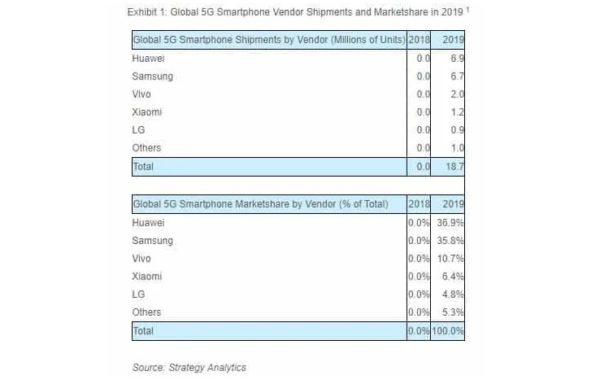 Samsung closed in at number two, shipping about 6.7 million 5G smartphones in 2019. Samsungâ€™s smartphones however were sold round the world as they did not have any sanctions imposed on them unlike the Huawei brand.

Vivo came in at a distant third, with a total shipping number of 2 million smartphones in 2019, equating to 11 percent of the total number of 5G smartphones that were shipped. With Xiaomi coming in fourth and LG in fifth places respectively.

Advertisement
ALSO READ:  Samsung Galaxy A90 will have a sliding and rotating camera mechanism

With the release of a number of new 5G smartphones from top dogs Apple and Samsung, it will be interesting to see the figures at the end of the year and find out which company outdid the others in shipping of their smartphones in 2020.